A séance with a Cayuse chief via Grand Ronde Chinuk Wawa! 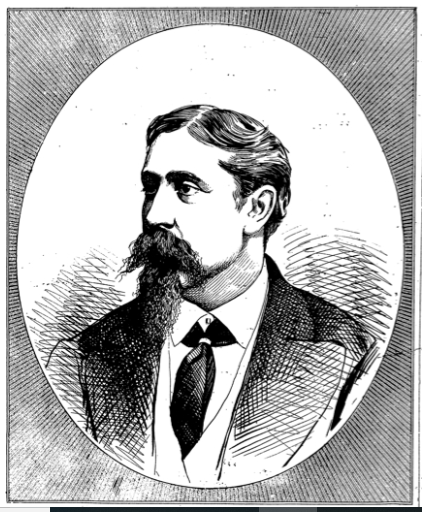 Apparently my powers of invention have been outstripped by other folks’ weird scientific uses for Chinuk Wawa.

A medical history written by an Oregon physician reports “our” — that’s his editorial “we” — experimental testing of a Boston (Massachusetts, that is, as will become obvious) psychic’s claimed supernatural powers.

The Chinuk Wawa here is genuine Oregon homebrew, written in the 1848 Yamhill pioneer author’s (William Lysander Adams, 1821-1906) own invented spellings…albeit kind of butchered by the typesetter as usual…right alongside his crotchety and racist presumptions.

As I often do, I’ll examine the Jargon section in greater detail after you read this excerpt:

We then concluded to interview [Charles H.] Foster the big gun of spiritualism in the east, who was exhibiting the wonders of spiritualism in Boston at five dollars a sitting. We wanted to see Foster as we had heard so much about his great skill, and a woman in Portland had shown us a lengthy description of her great powers (which we now know he never wrote, but which she wrote herself). When we knocked at his door, he opened it and held out his hand for five dollars. His look was repulsive to us. He appeared to be a cross between a mean Jew and rag-picking Chinaman. We thought, “Spirits do not use such coarse brutes as you are through which to communicate to mortals.” We were about to turn back, when we thought, if we are out on an “investigating” tour, why not go to headquarters? Spiritualists will say, “Why didn’t you go to Foster?” We went into his room where he had a “partner” sitting opposite him at the table. There were two other men sitting at the table, who had come to get communications from dead relatives in the spirit world, and swallowed down everything Foster told them came from their spirit friends. We told Foster we had come merely to investigate the truth of spiritualism. Can you read a communication addressed to a spirit in any language? He said, “Yes, I can.” We said, “Can you if the communication is folded up in a paper which you have not read?” He said, “Yes; write what you want answered on this paper and try me.” We replied, “No, our communications are already written and folded in papers which we will lay on your table.” He said, “What objections have you got to writing your questions here?” We answered, “We have objections not necessary to give, as we came here to investigate spiritualism.” We threw our folded papers on the table and asked him to get answers to our questions from the spirit world. Our first question was addressed to Teloukite, the Cayuse chief who was hung in Oregon City for the murder of Dr. Whitman at Waiilatpu in 1847.

A liberal rendering of which is: Chief Teloukite, I want to know where you are, whether in heaven or hell. I know that about twenty years ago, perhaps, you with four of your friends were killed near Oregon City by the Americans, who hung you with Klocamus, Tamahas, Kiamasumpkin and Isaaiashulackus. Foster is a brave man and tells me he understands all languages not excepting Chinook. Do not fear him, but communicate freely with him and he will tell me what you say. Now, tell him the truth.

…After resuming his conversation with his other visitors for a moment, he turned to us and said: “There is a spirit here I cannot understand.” We said, “What does he say?[“] Foster replied, “He says nisa–tissy–nisa tissy tumcux.” We said, “Go ahead, I understand the spirit if you can’t. Tell us what more he has to say. You said you could translate any language, and now don’t let a little classical literature balk you.” He said, “D–n such classics as that. I’d like to know who’s talking that stuff.” He snatched a piece of paper from the table with one hand in which he held a pencil, shoved it under the table and drew it out, showing us the paper on which was plainly written in a bold hand — Teloukite. He said, “What’s that? I can’t make it out, can you?” Here he refused to have anything more to do with Teloukite, as he could not understand his language; and we bade him good day and left. He had read the communication written in English inside the folded papers after giving him and his “pard” about twenty minutes to swing round into the clairvoyant state. We had seen many clairvoyants work themselves into that “state of exaltation[“] in less than half the time, and without the assistance of any “pard.” Foster could read the name Teloukite and write it on a slip of paper under the table, but the jargon was too much for him, working in conjunction with his spiritual partner, and the soul of a dead Indian.

— from William Lysander Adams, “History of Medicine and Surgery from the Earliest Times” (Portland, OR: Geo. H. Himes, 1888), page 56

Now to return to the Chinook Jargon text and evaluate its authenticity:

This Jargon message would be perfectly understandable to any fluent Oregon or more specifically (since the author was a Yamhill, Hood River, and Portland resident) Grand Ronde speaker of the time.

Some of Adams’s pronunciations lean toward those typical of White settlers; the parenthesized single letters above illustrate this.

Adams uses wake sia, literally ‘not far’, as a preposition ‘near’. This is legitimate Chinook Jargon, although my sense is that it’s one of the less common uses of the phrase. Checking against the Grand Ronde dictionary, you’ll see confirming examples such as “qʰá sayá wik-sayá sáltsəqw” = ‘way off there near the ocean’.

(LINGUISTIC ARCHAEOLOGY SIDE NOTE: Be aware that wik-sayá also has two separate functions from this, both of them adverbial: (1) the more literal ‘near(by)’ and (2) the more figurative ‘almost’. These distinctions are not explicitly pointed out in the G.R. dictionary, but they are illustrated really well with examples. Note that function (1) is probably the oldest, being formed from two pre-Chinuk Wawa [i.e. Nootka Jargon] words still showing their basic/literal senses; (2) has to have grammaticalized from that adverb into a sort of “degree” qualifier that’s known in all stages and dialects of C.W.; and the latest innovation would be (3) the prepositional use, which never became universally accepted, as we can discern from its ongoing variation with (1) plus the generic preposition in wik-sayá kʰapa… ‘not far from…’)

The expression “potlatch cumtux“, using the verb ‘give’ as an auxiliary or helping verb and expressing “to let someone know; make someone aware”, is not in the Grand Ronde Tribes’ 2012 dictionary, but it’s one that we run into here and there through several decades of recorded Jargon history. It’s a synonym for the far more usual mamuk-kə́mtəks. (For a little more on this ‘permissive’ use of an auxiliary patlach, you can see my dissertation, page 100.

Other than this, Adams’s grammar is not elaborate but he expresses himself perfectly clearly.

Of course the “clairvoyant” Foster’s Chinuk Wawa is a mess! He’s an East Coast man straight through, who probably thought he’d found a useful clue to seize on when he saw the word “Boston” on the paper he peeked at. His nisa–tissy–nisa tissy tumcux is a priceless addition to our treasured collection of Chinuk Wawa humor. My readers may have also noticed the recurrence of the popular joking portrayal of the Jargon as a “classical” language…As a matter of fact, elsewhere in Adams’ book, the joke is recycled into its own reverse when a judge is handed an imposing-looking prescription written, as was traditional, in Latin by his physician:

…He walks to a drug store and throws his prescription down on the counter and asks to have it filled. The druggist cocks his eye at it and says, “I do n’t understand Chinook.”

2 thoughts on “A séance with a Cayuse chief via Grand Ronde Chinuk Wawa!”