I think I just opened a time capsule!

When you get into it, this tiny article gives a humorous wink at the issues that were on the minds of northeast Oregonians in the late frontier era. 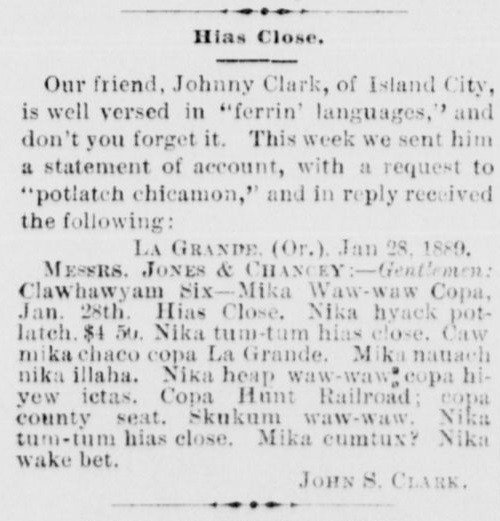 Our friend, Johnny Clark, of Island City, is well versed in “ferrin’ languages,” and don’t you forget it. This week we sent him a statement of account, with a request to “potlatch chlcamon,” and In reply received the following:

Doing some translating, because as usual, the newspaper editors knew their readers back then would understand Johnny anyways:

You can follow the links I put into the text to see that the Hunt Railroad was still not a done deal as of 1889, and the fighting over which town should be the seat of government in this county that split off from a split-off county dragged on until 1905.

I haven’t learned much yet about Mr. Clark himself, but his wife was just 37 years old at the time of this letter, so I’m guessing he wasn’t quite the cantankerous pioneer that he’s making himself sound like by choosing Chinuk Wawa (spelled in authentically idiosyncratic ways) to write in.

This implies that he was taking a stance, maybe not so much as an old conservative who was a tad exasperated with all the changes going on as perhaps a younger progressive impatient for the endless local political arguing to reach a conclusion.