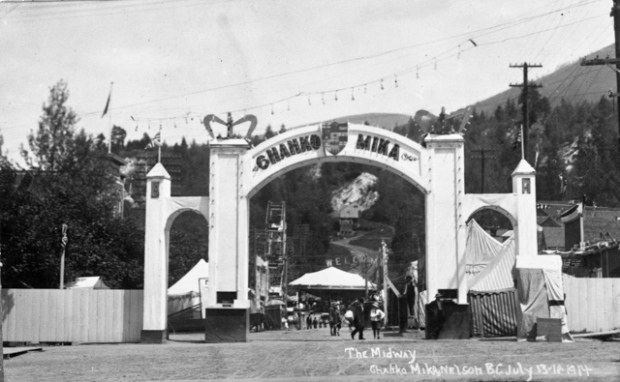 This Chinook Jargon letter from Greenwood, BC, is not only a neat new example of the post-frontier, English-language-influenced, genre of writing in the language–

–it also gets us closer to the origins of the later place name “Chahko Mika Mall” in Nelson, BC.  The source is a yearly local celebration named Chahko Mika (literally, “come on, you”) that’s mentioned here.  The earliest mentions of it that I’ve found in books are from the same year as this article, and the earliest newspaper mention is from March of that year explaining “the nature of the Chahko Mika carnival“, which all imply that the following letter expresses community members’ excitement about a new source of fun.

“Many men in Greenwood
understand men in Nelson will
give much money at Chahko Mika
for shooting birds and shooting
rifle. If men in Nelson true talk
about big fun at Chahko Mika
many men and many women will
go by C.P.E. wagon across Colum-
bia water to Nelson to get big fun.
Then return to Greenwood and say
men in Nelson very big friends.
(Signed) Faraway Friend.”—Nelson News.

This text is a further testament that many English-speaking white people considered siwash (literally “Indigenous person”) to be a word for “man”, and used it jocularly if insensitively.

The above letter is certainly white-to-white communication, a badge of old-timer identity as we’ve often seen from the later- and post-frontier times.  One of Chinook Jargon’s important uses: the secret language of an old boys’ club…

← The Siwash Had His Views
Tinas Martin →