One column over from an article I’ve already shared, I find more Chinuk Wawa for your entertainment.

Here’s an excerpt from a report on the 50th anniversary of a newspaper in Washington state’s capital city: 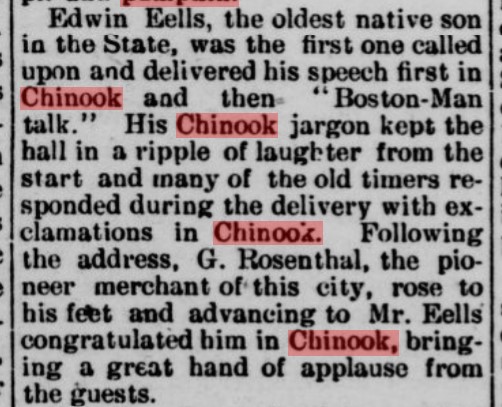 Edwin Eells, the oldest native son in the State, was the first one called upon and delivered his speech first in Chinook and then “Boston-Man talk.” His Chinook jargon kept the hall in a ripple of laughter from the start and many of the old timers responded during the delivery wiht exclamations in Chinook. Following the address, G. Rosenthal, the pioneer merchant of this city, rose to his feet and advancing to Mr. Eells congratulated him in Chinook, bringing a great hand of applause from the guests.

People who had spoken the language daily in past times were incredibly sentimental about Chinuk Wawa.

Edwin Eells (1841-1917) was born at Tshimakain Mission in Spokane Tribe country, to a missionary Settler family that became enormously influential in our region. He had been a lawyer and a US Indian Agent. He was a more or less lifelong speaker of the Jargon.

← The Mission Field and “Chinhook” (Part 1 of 6)
Why is the late Paul Allen’s superyacht the “Breast” in Chinook? →