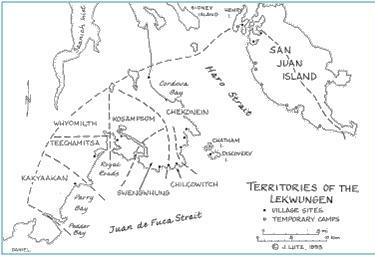 …And judge how well I did at translating that one. (I hadn’t yet seen the piece below.) 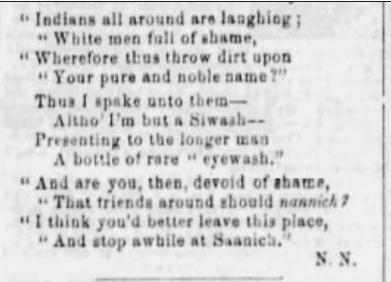 Some lines under the above title having appeared in our issue of the 10th, we have had numerous applications for an explanation of them from persons unacquainted with the language. Not being very apt at Chinook ourselves, and yet ever desirous of relieving public anxiety, we submitted them to “Skedigate,” [Skidegate, DDR] the well-known Chinook interpreter, who has kindly furnished us with the following literal translation:

On the Governmental bridge,
Two men together talking,
One of whom was rather tall,
Both towards me walking.

“Indians all around are laughing;
“White men full of shame,
“Wherefore thus throw dirt upon
“Your pure and noble name?”

Thus I spake unto them —
Altho’ I’m but a Siwash —
Presenting to the longer man
A bottle of rare “eyewash.”

“And are you, then, devoid of shame,
“That friends around should nannich?
“I think you’d better leave this place,
“And stop awhile at Saanich.”

N[ayka].N[ánich]. [was the pseudonym of the CW poet, DDR]

I find it a delightful and funny coincidence that both “Skedigate” and I chose to translate the Chinuk Wawa original poem into English, plus a CW word in the last verse! 🤣

For more information about the traditional owners of the Victoria, BC area, please visit SongheesNation.ca.