1791: Marchand in Haida Gwaii and a tiny but excellent word list

There’s very little going on here, linguistically. (But be sure to read on!)

I’m not sure we can draw lots of conclusions, even tentative ones, from the early contact narrative I’m looking at today. This expedition’s members don’t seem to have recorded any substantial information on language use — and the published narrative is padded with quotes from other folks’ journals.

(Étienne Marchand lived from 1755-1793, which might explain why he did not write up his own journals for publication.)

The one interesting part of this book is a 6-word (!) vocabulary of Haida, which turns out to actually include Nuuchahnulth and Tsimshian words. So, that corroborates the pattern we’ve seen that there was less a “Nootka Jargon” in early contact days than a formless mishmash of words from several languages.

Other than that point, I’m so underwhelmed with this book that I’m not going to bother transcribing any passages. I’ll just show you clipped-out selections.

Here’s a passage (page 353, August 1791) where it’s admitted that the French visitors really didn’t verbally communicate with the Tlingits (“Tchinkitanayans”) —

Here it’s claimed that the Tlingits are lacking just one thing — language! (Pages 371-372.) 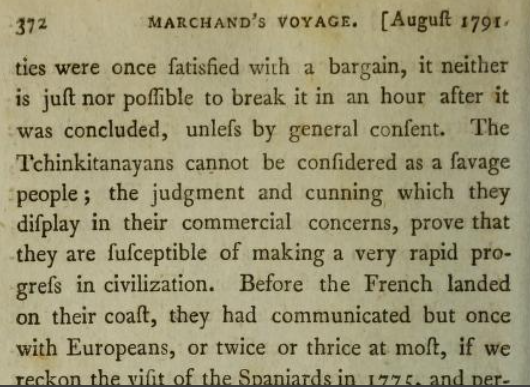 Pages 378-381 take the trouble to demonstrate that Tlingit and Nuuchahnulth are unrelated; modern linguistics agrees with this conclusion.

The following pages say more about Lingit language, partly about the many sounds novel to Europeans and partly about how little the French visitors were able to pick up of this language.

Page 403: the Haida language was equally impenetrable to the French mariners, and the narrative in fact sometimes just fills in points of ignorance with “a stranger might imagine…” and “we should be tempted to believe…”!

On page 451 the narrative again speculates extravagantly, once more attributing to the improvised hand gestures used in first contacts between PNW Indigenous people and the French the power of expressing deep and complex truths.

Now look at the entire lexicon of 6 words that captain Chanal was able to collect in Haida Gwaii. Pages 483-484 show a “Cloak Bay” Haida vocabulary that includes… 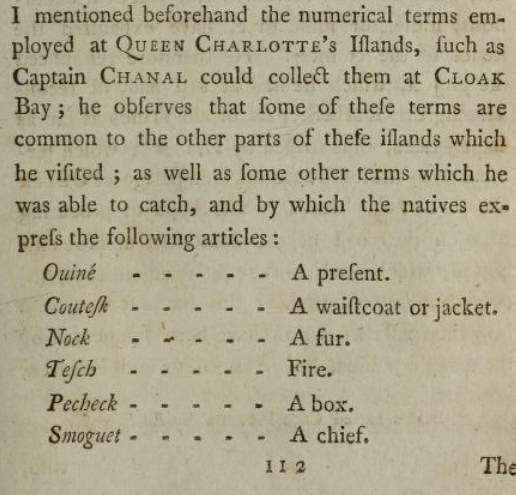 The writer gives PNW Coast people the mixed compliment of suspecting that they are the degraded remnant of a formerly great civilization: 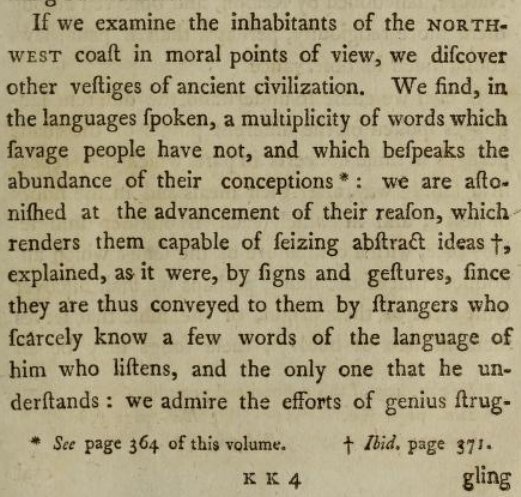 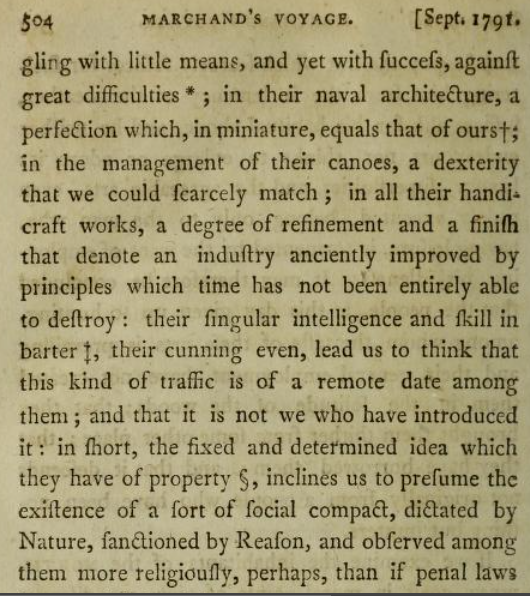 Pages 503-504 express admiration of Native people’s brilliance, which the Europeans readily perceive despite not comprehending the Indigenous languages.

Page 510: the Tlingit, Haida, and Nuuchahnulth languages are unrelated — again, a conclusion with which present-day linguists agree.

If you’d like to read this book in the original French, which I imagine will be a somewhat more rewarding experience, click here.