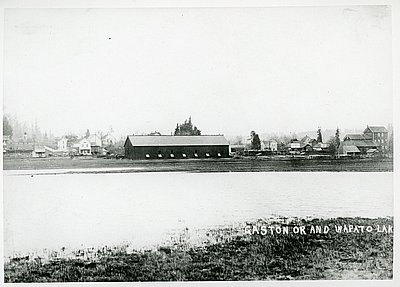 Neall’s recollections are clear and well-observed, no great surprise from someone who quickly learned and used Chinuk Wawa in the Willamette Valley and on the Columbia River.

Pages 54-55 (in his own style of punctuation and spelling), Neall tells us interesting things about the Chinuk Wawa and Canadian/métis speech of French Prairie people:

In the so called French settlements or French Prarie the population composed generally of Canadian french who had found their way here from the Rocky Mountains where they had been trappers for the Hudson Bay Company. Generally married to Indian or half-breed women, speaking little or no English, and we not speaking the french language, our mode of communication was through the medium of Chniook jargon, a conglomeration of French, English and Indian tonges.

I could read french, but did not speak it, could understand but very little when hearing it spoken. I had with me a small pocket edition of Perrine’s French Fables, which some of the females seeing one day as it had fallen out of my pocket, insisted that I should read to them, as they saw it was in their language. I protested that I could not speak French, only read it, but nothing would do but read I must. Forced to comply, I “sailed in” and like General Gillam I went thro with a rush, hit or miss, reading these fables to the great delectation of my audience. Instead of depreciating or laughing at my pronunciation as we Americans would at a Frenchman blundering along in our language, they expressed unbounded admiration and declared it to be la bon francis, and that the reason I could not understand them in conversation was because they spoke such bad French, and they gave me the name of L’homme qui parle le bon Frances.

As I wandered along under the bluffs of Oregon City I observed some Indians who had come down from the Upper Columbia, having birch bark canoes, something I had never seen before. They were mere cockleshells, not more than twelve or fourteen feet long by two feet wide, and so frail and light that one man could easily carry one on his shoulder. As I stopped to look at the curiosity I asked the Indians, in Chinook, if they would take me down to Portland, to which they agreed for the consideration of ten dollars, and as I, not knowing the frail nature of the craft, put my foot in it, I came near going thro it, to the horror of the owners, who pulled me back and hauled the canoe upon the bank for repairs, which were made by melting some pitch and plastering on some smeared patches of birch bark to stop the leaks. Which being done, they instructed me to put my foot on entering on some small pieces of board to prevent going thro, and then to lay down on my back while two of them, each with a strong paddle, entered for native power.

After being rescued by Chinook Indians from rough water off “Scarboroughs point, nearly opposite Astoria”,

…some of them had gone through the snow some two miles where there lived an old Catholic Padre [J. Lion[n]et?] who lived there to Christianize these poor savages and informed him of our advent. He was an old Frenchman, at least seventy five years old. He immediately came to us, and in the Chinook jargon invited us to his house, where we proceeded, & had the benefit of a warm shelter and a good fire to dry ourselves, while he proceeded to regale us upon boiled beans, tea, and smoked salmon, the only articles of food he possessed.