(First in a mini-series.) The credited author disclaimed all responsibility…

…as you can see here and elsewhere… 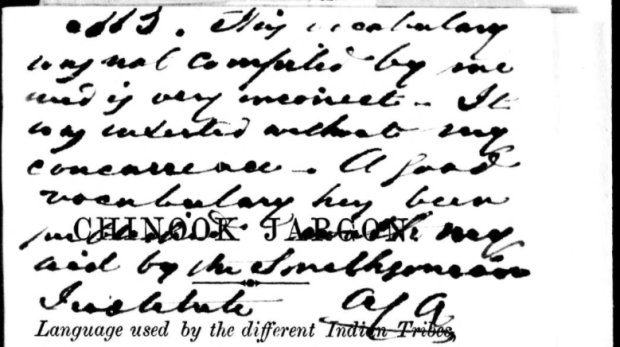 “This vocabulary was not compiled by me and is very incorrect. It was inserted without my concurrence. A good vocabulary has been published with my aid by the Smithsonian Institute [sic] ACA” — page 25 (Anderson may mean George Gibbs’ privately published 1863 dictionary)

But the Chinook Jargon document carrying an author’s name of Alexander C[aulfield]. Anderson, “Hand-book and Map to the Gold Region of Frazer’s and Thompson’s Rivers, with Table of Distances” (San Francisco: J.J. Le Count, 1858), is worth our serious attention.

For one thing, the phrasing on page 25…

“Language used by the different Indian Tribes, French and Half-Breeds, of Frazer’s River, Puget Sound, and surrounding country, as the means of Conversation with Americans”

…as well as the mostly Canadian-French-language map I’m showing here, back up the findings I’ve been sharing with my readers about how limited the Jargon’s region of usage was until the 1858 Fraser [sic] River gold rush. Up to that time, and for a while after, Canadian/métis French was the lingua franca of the fur trade in most of the interior regions, including what’s modern British Columbia.

Part of a basically métis map of the inland PNW (with place names such as Rivière au Pavillon, R. aux Chapeaux, Mauvais Rocher, Camp du Chevreuil, etc.), by A.C. Anderson, from the end of his 1858 book

Plus, as far as my analytical eye sees, it’s not that the vocabulary shown in this book is bad Jargon; the grammar here is as good as what I’d expect from a highly seasoned old fur-trade hand like Anderson. It’s more an issue of being a small selection of Jargon words, with numerous typographical errors left uncorrected by anyone knowledgeable.

I’ll have just a couple of commentary footnotes to add to it:

…nika marsh [2] copa mika mox totilum dollar is more like ‘I’ll spend $20 on you’, to my ears. It’s totally understandable, though, and maybe some folks did say < marsh…dala > (másh…dála) to express ‘pay’, at that relatively early time in Chinook Jargon history.

The Jargon here is okay stuff, but it’s made-up.

I bet you it would’ve been better if Anderson had just quoted some real, remembered conversation for us. For instance, “klatawa copa nesika” for ‘go with us’ might have come out in a more precise phrasing like “klatawa konamoxt nesika” (‘go along with us’).

What do you think? Kata mika tum tum?

One thought on “Didactic dialogues in dictionaries of Chinuk Wawa (Part 1: AC Anderson)”