More about sometime court interpreter Mr. DeShaw (in a book that I’ll write separately about) : 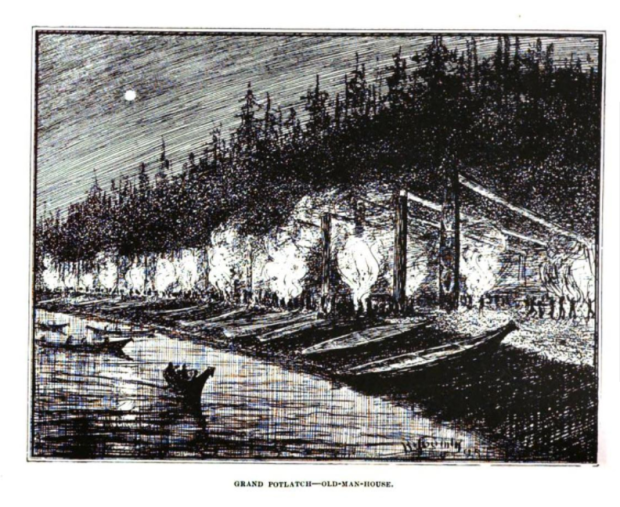 Some background on this fella; I find it notable that he’s said to understand some “pure Indian”, in this case Lushootseed Salish. Many pioneers in the Seattle area are known to have mixed Lushootseed into their Chinuk Wawa.

Here are a couple of passages discussing him in an 1895 book:

An interesting character still resides, 1895, at the Old-Man-House reservation. He is William Deshaw, whom the tides of time cast upon the beach at Agate point, Kitsap county, 27 years ago.

Deshaw, a rank copper-head to this day, is part of the flotsam and jetsam that came into the Sound along with the early tide of emigration. He was born in Galveston, Texas, in 1834, and was part of the early drift of Arizona, New Mexico, and California. He went into the Sacramento [northern California] valley a year before the

49ers struck the coast and true to his nature of moving out on the flood tides soon left there and came this way. He has been shot full of arrow holes, and has among numerous other trophies five Indian scalps in his trunk of his own taking. That he ever remained here so long is entirely due to the climate. Let the rains of one long winter on Puget Sound percolate down a man s back and he seldom gets away after that. He takes to it, as it were, like the moss on the roof, and becomes a fixture of the location. And so it was with the old Texan. He drifted in here for a stay of a month or two and he is here yet. He soon got mixed up with the natives, became a squaw man and never after that could he pull himself away. And why should he leave? He had wedded into the royal house of Sealth [chief Seattle]; wedded a princess, a grand-daughter of the chief of the allied tribes of the Duwamish, Samamish, Squamish [Suquamish], etc., and probably forgot about his old-time habit of drifting. Mrs. Deshaw, nee Princess Mary Sealth, has been dead these many years, and now lies buried in the little reservation churchyard on the hill across the narrow strip of tide water. There are, however, two fine looking girls and some boys left of the union, and in their society the old man is happy and contented.

At the extreme limit of Bainbridge island is Agate point and directly across,

the reservation. On the point is the old trading store of William Deshaw, first started in the early [eighteen-]sixties, and has been a trading store ever since. Deshaw has been left in undisturbed possession ever since and there he is to-day, probably his only accumulation being his now motherless but happy family of halfbreed boys and girls. Every nook and corner hereabouts appears remindful of the musty past, everything is interesting to look upon or ruminate over. Deshaw’s old trading store is a museum of antiquities, and its restless, grayhaired and slippered proprietor is the one living specimen and most interesting of all there is on exhibition. Sixty years old, yet he is apparently as full of vitality as he ever was. There is just as much fire in his small gray eyes and as much of a spring in the step as there was when he was taking the scalp-locks of the bloodthirsty Comanche and Apaches.

The old gentleman hearing our approach one Wednesday morning came shambling out onto his front porch and was soon in the midst of an interesting talk on the Indians with whom for so long he has been associated. Although the better part of his life he has spent among the tribes that first held possession of the wooded shores of the Sound here, he is by no means an Indian lover, especially of the renegade set which now has possession of Old-Man-House village. He has without doubt during the last 25 years talked twice as much Chinook and pure Siwash as English yet he uses the strongest expletives of the English tongue in speaking of his present Indian neighbors. “Lo, the poor Indian,” finds no sympathy in his breast. He thinks it a great pity that 14,800 acres of land should be kept exclusively for a few shiftless and unworthy Indians to live upon it to the exclusion of the white people, and so it appears. They have had these lands for generations yet there is just the narrowest border of clearing along the waters that bears any resemblance to cultivation, and that for the most part is due to the labor of a few white men rather than to the Indians.

“They never would work,” says Deshaw, “and never will. Kindness is wasted upon them; every kind act done them is returned with an injury.”

Probably the otherwise kind-hearted old man would not talk so but for the fact that the old Indians, those who gave allegiance to old Chief Sealth [Seattle], have all been crowded out and either dead or driven away and become lost in other tribes by renegade Indians. These last are “cultus” people, who have been
run out of and off other reservations and becoming wanderers and veritable Indian tramps have at last found a stopping place at Old-Man-House.

— from “The Siwash: Their Life, Legends and Tales / Puget Sound and Pacific Northwest” by Joseph Allen Costello (Calvert Company, 1895)

← Indefinite specific : indefinite nonspecific :: A CW pattern?
From Z to A: Correcting a small mistake about tree ‘limbs’? →