The Picketts about the time of his Charge (image credit: Hollywood Cemetery)

“Pickett and His Men” is a popular biography by [Mrs.] Lasalle Corbell Pickett (2nd edition; Atlanta, GA: The Foote & Davies Company) of her husband, Confederate States of America General George — one of many Civil War figures who spoke good Chinook Jargon.

I’ve previously written about some Chinuk Wawa content from this book. (See “General Pickett: ‘Keep Up a Skookum Tum-Tum, Dear One’ “.)

Today we’ll look at its version of one of the most often translated English prayers. Separate posts will examine other Jargon connections with Pickett.

Today, from pages 97-98, I want to examine his wife’s further adoring claims about the capabilities of George Pickett, who had been last in his West Point class and went on to be best known for the ill-advised Pickett’s Charge in the Battle of Gettsburg.

Anyway — here Pickett is portrayed as genius of Pacific Northwest languages. Which may be understandable, as his second wife (the one before Lasalle “Sallie” Corbell) was a Haida woman known as Morning Mist or Sâkis Tiigang (which appears to reflect Haida ‘fog lying down’ according to my dictionary consultation). He had a son with her at Fort Bellingham in Oregon (later Washington) Territory. Pickett served about 5 years dealing directly with Native people in the US Army in frontier-era PNW, long enough to have learned Jargon well, and no evidence suggests he failed to.

Today’s selection begins as a comment on the 1856 Indian war across the Pacific Northwest:

Captain Pickett was greatly distinguished in this war, not only as a soldier, but as a promoter of the arts of peace. He made friends even of his enemies, learning the dialects of the different tribes, that he might be able to teach them better principles of life than any they had known.

Over them he exerted an almost mesmeric influence. The red men were all his friends, but the most devoted among them were the Nootkams and Chinooks, who greeted and spoke of him always as “Hyas Tyee,” “Hyas Kloshe Tyee,” “Nesika Tyee,” [that is] “Great Chief,” “Great Good Chief,” “Our Chief.” He translated into their own jargon, and taught them to say, and to sing, some of our most beautiful hymns and national airs, and the Lord’s Prayer:

And here follows the translation of that prayer that’s attributed to George Pickett; the wording and the literal back-translation suggest it is unique to him, perhpas expanded from other versions current in his era. (I’ll feature other translations on this site soon.) 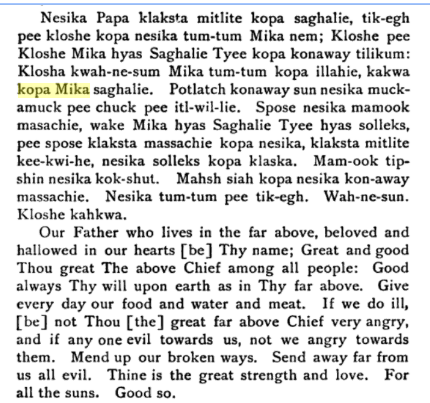 tum-tum Mika nem; Kloshe pee Kloshe Mika hyas Saghalie Tyee kopa konaway
tə́mtəm mayka ním; (t)łush pi (t)łush [4] mayka hayas-sáx̣ali táyí kʰupa kʰánawi
heart your name; good and good you very-high chief among all
DDR: ‘hearts is your name; your are good and good, very-high chief to all’
Mrs P: ‘hearts [be] Thy name; Great and good Thou great The above Chief among all’

nsayka pápá (t)łáksta [1] mí(t)łayt — ‘Our father who is…’: The use of (t)łáksta, which normally is a question word ‘who?’ or an indefinite ‘anyone; someone’, to form a relative clause, is fairly rare but is known from other Jargon sources, particularly in northern dialects. More specifically, I’m used to seeing it in the 3rd person, but compare note [8] below for a seeming 1st-person plural occurrence.

kʰupa sáx̣ali [2] — this can be taken as a sort of compound adverb ‘up above’, which is a common enough structure in Jargon. However, the expression kʰupa mayka sáx̣ali ‘in your sky’ coming soon after suggests that the translator meant this first occurrence as ‘in the sky’ / ‘in heaven’.

tíki(x̣) [3] pi (t)łúsh — We’ve seen tíki(x̣) used like an adjective ‘beloved’ elsewhere (see “Ca. 1880: Grand Ronde Discovery“), so this usage here isn’t as odd as I might’ve thought. Of course this word nearly always means ‘to want’ or ‘to like’, otherwise.

(t)łush pi (t)łush [4] mayka — Looks like the translator made a small slip, judging by Mrs P’s English version; probably < hyas pee kloshe > (‘great and good’; a typically Protestant phrasing?) was intended. This is my chance to observe that < hyas >, the word for ‘big’ in Jargon, isn’t nearly as often used for the metaphorical ‘great’ (as in ‘wonderful; awesome’) as we throw ‘great’ around in English.

(t)łúsh kwánsəm mayka tə́mtəm [5] kʰupa ílihi –This is more ambiguous than the translator intended. In fact it’s what some linguists call a “garden path” sentence, leading your mind one way but then seeming like it means something else. I initially read this clause as meaning ‘Let your heart always be with the earth’ (with (t)łúsh in its function as an Imperative marker, and kʰupa taken as ‘with’). Kind of flummoxed by the oddity of that sentiment, I started over, and came up with the equally grammatical reading ‘Your heart is always good on earth.’ That’s hardly an improvement in terms of meanings, though! We know for certain that the translator was trying to express what we familiarly know in the English version as ‘[May] Thy will be done on earth’. Frankly, the Jargon here falls short of saying quite that, even if we replace ‘heart’ with ‘will’. What would’ve made the difference would be to add a mamuk ‘do’ (your will) or mamuk kakwa ‘do as’ (you wish) here.

pá(t)łach kʰánawi-sán nsayka [6] mə́kʰmək — This too is somewhat garden-pathy. The most straight-ahead reading of it is as I show above: ‘Give every day our food.’ And that works all right as a way of expressing the familiar English phrase ‘Give us (this day) our daily bread.’ But because we’re aware of that phrasing, we’d expect the Jargon version to also say ‘give (to) us‘. Nevertheless, Mrs Pickett’s own English version indicates that her husband, or whoever the translator was, indeed meant to say ‘give our food’.

wík mayka hayas-sáx̣ali táyí [7] hayas-sáliks — This would’ve been clearer if punctuation had been added. Evidently what’s intended is ‘Don’t you, great far-above chief, be very angry.’ Now, that’s a weird way of talking, even in English, wouldn’t you agree? It’s not normal, and it’s not easy to understand, when someone interrupts their command with a vocative ‘O Chief’. It’s terribly literary style, and thus it ain’t real Jargon. Take out the hayas-sáx̣ali táyí part, though, and the grammar here is as excellent as the rest of this translation tends to be.

nsayka sáliks kʰupa (t)łáska [9] — At the risk of pointing out the obvious, a negator (I’m guessing < wake >) was left out, maybe by the typesetter! On that subject, this translation’s consistent use of wik as the general negator appears to reflect genuine early-to-mid frontier era Chinuk Wawa, i.e. it’s more like Grand Ronde speech than northern speech, where hilu is more often used.

mamuk-t’ə́pshin [10] nsayka kákshit — I really like this metaphor. The sense of t’ə́pshin is one of ‘patching a leaky thing’. The literal reading of this phrase, then, is ‘patch up our broken things’. It’s worth pointing out here, though, that kákshit is rarely used in the noun sense that this entails. So maybe what the translator was aiming for was ‘patch up what we’ve broken’? Normally a relative expression such as that would require you to add in ikta ‘what’, or else maybe ukuk ‘this/that’: mamuk-t’ə́pshin íkta nsayka kákshit OR mamuk-t’ə́pshin úkuk nsayka kákshit.

My main criticisms of the translation here are of spots where it tilts into a literal rendering of the literary English original that it’s evidently working from. Aside from those, the grammar is mostly very good and appears to be genuine Chinuk Wawa for its time and place.

← “The Mantle of Elias” and Chinuk-Chehalis Wawa
Denasalization in Michif (and in Canadian French?) →