California CPE: Chinese cyclist bumps one (or “blumps” one?) 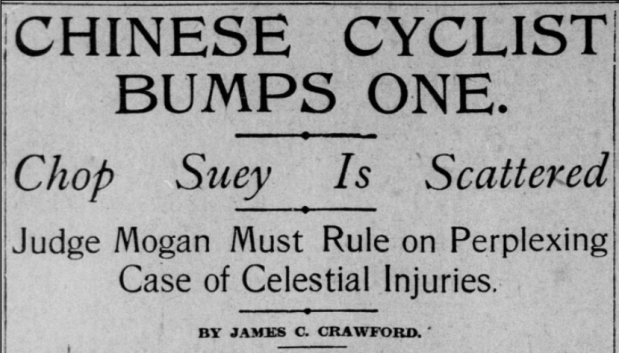 Page 16 of the SF papers was a lively place a hundred or so years ago. Local human-interest and true-crime stories were reported with plenty of value judgments injected, and with cartoons as illustrations.

Consider yourself forewarned; after you read this, you can look for my comments on the Chinese Pidgin English that’s quoted. 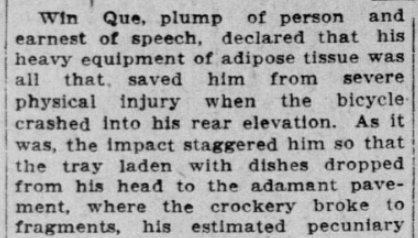 Judge Mogan Must Rule on Perplexing Case of Celestial Injuries.

Win Que, plump of person and earnest of speech, declared that his heavy equipment of adipose tissue was all that saved him from severe physical injury when the bicycle crashed into his rear elevation. As it was, the impact staggered him so that the tray laden with dishes dropped from his head to the adamant pavement, where the crockery broke to fragments, his estimated pecuniary loss being $16. Besides, his nervous system sustained a serious shock, for he felt the wheel before he saw it. The resilience of his body, however, averted the damage that a less corpulent man would have received. He respectfully asked Police Judge Mogan to pronounce Joe Queriol, youthful and swart [i.e. Latino], guilty of violating the ordinance which regulates the speed at which bicycles may be ridden within the municipal boundaries and also to compel the payment of monetary compensation for the property damage. His Honor cheerfully complied with the first request, but expressed both unwillingness and inability to act as collecting agent in the premises.

It was on Broadway, between Dupont and Stockton streets, that the collision occurred. Win Que was crossing the thoroughfare and balancing upon his pate a meal of choice viands which had been ordered from the chop suey establishment of which ha was a director when Master Queriol came along on his wheel. “Him clom belly quick, allee same autobeel, you sabbee?” said Win to the Judge. “Dlen him hittee me biff. Dishee allee bloke. Slixteen dollah. Sabbee? Likee money.”

Police Sergeant Ross and other members of the Chinatown squad corroborated Win’s statement as to the excessive speed of the bicycle, and Master Queriol endeavored to extenuate his offense by the plea that he was “coasting,” but the court said he had no right to relinquish control of his brakes or pedals while riding on such a crowded avenue as Broadway.

“Him clom [1] belly quick, allee same [2] autobeel, you sabbee?” …
he come very quick, entirely same automobile, you know? …
‘He came along really fast, just like a car, do you understand?’

“Dlen [1]  him hittee me biff. Dishee allee bloke [3]. Slixteen [1] dollah. Sabbee?
then he hit me “biff”. dish entirely break. sixteen dollar. know?
‘Then he ran into me, “biff!” The dishes all broke. That’s sixteen dollars. Understand?’

[1] The three examples here of an insertion of “L” (following an obstruent first consonant to make a cluster), are highly typical of how West Coast Chinese Pidgin English is reported to us in old sources. Surely this was inspired by a real, documented fact, that CPE rendered English clusters of {consonant + “R”} as {consonant + “L”} (as in < bloke > in today’s clipping). To say the least, this foreign pronunciation seems to have lodged in the consciousness of native speakers of English quite vividly as “how Chinese people speak”. But what then went on is a matter for continuing research. (A) Did {consonant + “L”} then get generalized by Americans into a perceptual stereotype of CPE? (B) Did Chinese speakers of CPE themselves notice this difference between their own and Americans’ way of talking, and create a phonological rule that tended to turn obstruents into clusters? (C) Did both things happen?

[3] < Bloke > quite likely was a verb meaning ‘to break’, both transitive and (as in ‘the dishes broke / got broken’) intransitive. That’s true of other Pacific pidgin Englishes, for example in Hawai’i. It’s also quite similar to the range of meanings and uses of Chinuk Wawa kákshit…

Giving my customary overall evaluation, I’d say the West Coast CPE as shown to us in today’s news article looks genuine and fluent.

Just one question is hanging out waiting for more information — did folks really pronounce all those {consonant + “L”} clusters?

← Voyageur French things that made me think of Chinuk Wawa, and think again
Mrs. Jamie Boston Bar writes to the editor →