Has anyone ever written about WHY Indian Shaker Churches use(d) Chinook Jargon?
I’m not sure.
But here, from a well-known anthropologist, is some useful history about how they once did so quite a bit: 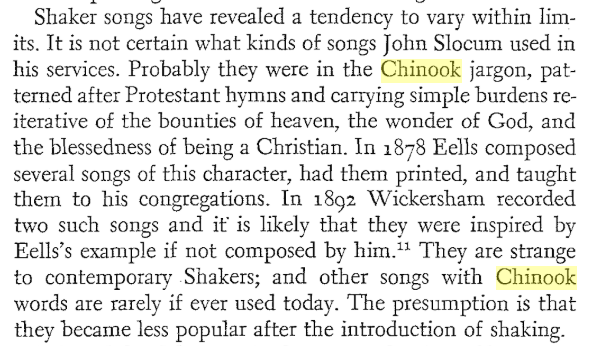 Shaker songs have revealed a tendency to vary within limits. It is not certain what kinds of songs John Slocum used in his service. Probably they were in the Chinook jargon, patterned after Protestant hymns and carrying simple burdens reiterative of the bounties of heaven, the wonder of God, and the blessedness of being a Christian. In 1878 [Rev. Myron] Eells composed several songs of this character, had them printed, and taught them to his congregations. In 1892 [Judge James] Wickersham recorded two such songs and it is likely that they were inspired by Eells’s example if not composed by him. They are strange to contemporary Shakers; and other songs with Chinok words are rarely if ever used today. The presumption is that they became less popular after the introduction of shaking.

— Homer Barnett, “Indian Shakers: A Messianic Cult of the Pacific Northwest” (Carbondale: Southern Illinois University Press, 1972), page 235
[Note: Unfortunately, Barnett’s excellent book somehow lacks a citation for Wickersham‘s two songs. The judge’s papers are definitely in archives; on a research trip, I’ve looked through some of them in Juneau, Alaska. More searching should turn up the two Chinuk Wawa songs. They’ll be of enormous interest (Wickersham avidly took notes on Indian languages); compare the song below.]
Barnett lays out a strong case elsewhere, too, that Eells’s Jargon hymns had a big influence on Slocum and company.
And it’s clear from Barnett’s book that in the late-frontier era of the early Indian Shaker Church, Chinuk Wawa played a major role in communications between members and White outsiders. (Cf. pages 46, 106, 266, 295-296.)
I also expect that the markedly intertribal nature of Shaker services, which are frequently described as being attended by visiting Indians, strengthened the need for prayers in a language that everyone present could follow.
But Barnett also makes crystal-clear that subsequent generations in the church no longer knew Jargon, and “puzzled over” even the frequent ritual interjection masi (page 234). (‘Thanks’ in Chinook Jargon.)
From another anthropologist, we have the words of at least one Shaker song in Chinuk Wawa:

Looking at that in some detail:

That fourth line is the key to understanding the prayer. The first three lines, short and sung in isolation from much verbal context, could be perfectly well translated as ‘Here is his father / Here is his child / Here is his good (or holy) spirit’.
Now, if you have prior knowledge of Christian ideas, this despite its grammaticality will sound puzzling: who is this “he”?
And if you go on with that line of thought, you’ll be wondering about the fourth line, which you’ll be translating as ‘Here is his good like that/his amen’! Truly odd. We know that łúsh kákwa is the conventional way to say ‘amen’ in Jargon, but to speak of ‘his amen’ is weird. That’s when you realize you can also legitimately understand the last line as having punctuation: ‘Here he is, amen’. And the rest suddenly snaps into focus — see my translation above.
I’d also point out that my own very limited exposure to present-day Indian Shakerism suggests that the French to Chinuk Wawa to Lushootseed Salish loan santuspli is more used for ‘Holy Spirit’ than is łúsh tə́mtəm. Which possibly supports Barnett’s observations about the obsolescence of Chinook Jargon in the religion.
For more information on this Pacific Northwest religious movement, you might read “The Indian Shaker Church: A Study of Continuity and Change in Religion” by June McCormick Collins (Southwestern Journal of Anthropology Vol. 6, No. 4 (Winter, 1950), pp. 399-411).

One thought on “Shaker prayer”