Necessity made a tongue (and a prayer)

Along with the repetition of old saws about the origin of Chinook Jargon and its use in the Civil War, we find a nice new translation of a familiar Christian children’s prayer.

I imagine the writer is editor Joseph F. Halloran; otherwise the evident co-owner, Pitman W. Parker. I know almost nothing about either fella (do any of my readers know more?), but it’s implied below that the writer learned Jargon the old-fashioned way, “on the street” in the frontier era.

As usual, I’ll first show you the original news article, then turn it into a little Chinook Jargon lesson!

NECESSITY MADE A TONGUE.

The Story of the Invention of the Ephemeral Chinook Language.

Out of the necessity of a universal language for commercial transactions has been evolved the harsh, discordant volapuk [Volapük], yet not generally accepted. Its only charm, if it possesses any, is the simplicity of its grammar. It has no horrid irregular verbs, like the terrible aller which is the bete noir of all students of French; nor has it that awful subjunctive mood of our own language, which the average Kansan and Missourian, instead of letting severely alone, has laboriously wrestled with until they have constructed one or two veritable provincialisms, and which sound, when heard by the cultivated ear, like an epitaph in a Yorkshire country churchyard. 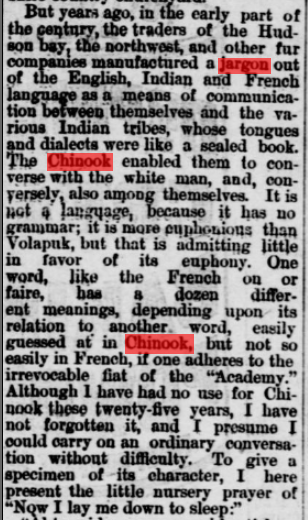 But years ago, in the early part of the century, the traders of the Hudson Bay, the northwest [North West Company], and other fur companies manufactured a jargon out of the English, Indian and French language as a means of communication between themselves and the various Indian tribes, whose tongues aud dialects were like a sealed book. The Chinook enabled them to converse with the white man, and, conversely, also among themselves. It is not a language, because it has no grammar; it is more euphonious than Volapuk, but that is admitting little in favor of its euphony. One word, like the French on or faire, has a dozen different meanings, depending upon its relation to another word, easily guessed at in Chinook, but not so easily in French, if one adheres to the irrevocable fiat of the “Academy.” Although I have had no use for Chinook these twenty-five years, I have not forgotten it, and I presume I could carry on an ordinary conversation without difficulty. To give a specimen of its character, I here present the little nursery prayer of “Now I lay me down to sleep:” 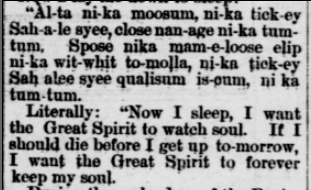 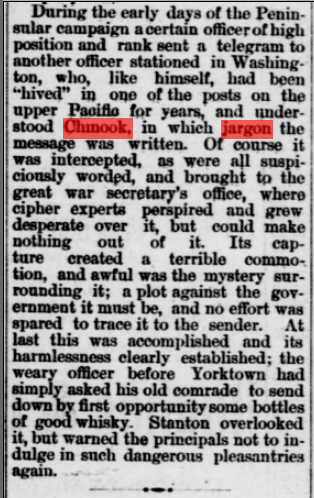 During the early days of the Peninsular campaign a certain officer of high position and rank sent a telegram to another officer stationed in Washington, who, like himself, had been “hived” in one of the posts on the upper Pacific for years, and understood Chinook, in which jargon the message was written. Of course it was intercepted, as were all suspiciously worded, and brought to the great war secretary’s office, where cipher experts perspired and grew desperate over it, but could make nothing out of it. Its capture created a terrible commotion, and awful was the mystery surrounding it; a plot against the government it must be, and no effort was spared to trace it to the sender. At last this was accomplished and its harmlessness clearly established; the weary officer before Yorktown had simply asked his old comrade to send down by first opportunity some bottles of good whisky. [Abe Lincoln’s Secretary of War, Edwin] Stanton overlooked it, but warned the principals not to indulge in such dangerous pleasantries again.

Here is a closer look at the Jargon prayer, bridging the Chinuk Wawa and the editor’s own literal translation:

[1] < moosum > : without any clarifying context, this verb normally means ‘sleep’. It does work all right for ‘go to sleep, fall asleep’, although my ear kind of wants the traditional wording “…I lay me down to sleep…” to be more overtly expressed, for example with a literal …náyka łátwa músum… ‘I go to sleep’ or British Columbia-style < …naika lidawn pus musum… > ‘I lie down to sleep’.

[2] < ni-ka tick-ey Ø > : This seems to me a typical English-influenced way of saying “I want (someone to) X-verb”. (Compare note 4.) It strikes me ear as more consistent with general Chinuk Wawa grammar to use — IRONY ALERT — pus, which is the subjunctive mood that the writer claims doesn’t exist in Jargon! So, náyka tíki pus sáx̣ali-táyí łush-nánich náyka, i.e. ‘I want that God take care of me’.

[3] < syee, > : Ignore the comma, it’s irrelevant. This weird recurring spelling of táyí is unexplained. Maybe the editor was misremembering, even though in local English usage < tyee > was a familiar word for a kind of salmon as well as for a Native chief.

[4] < elip ni-ka wit-whit > : This use of íləp as a preposition ‘before’ is more typical of non-Native than Native speech back in the day. It parallels English, word for word. (Compare note 2.) But in for example the authoritative 2012 Grand Ronde Tribes dictionary, there’s no documented way to express ‘before X-verb’, nor ‘after X-verb’. My sense drawn from all the Jargon I’ve been exposed to in 20 years’ studying is that there are fewer prepositions than we Anglophones expect. I’d instead use the much more firmly documented and more common adverbial function of the same word(s), so, something like íləp pus X-verb ~ ‘previously if X-ing’ (and kʰimt’á pus X-verb ~ ‘subsequently if X-ing’).

[5] < wit-whit > : This verb normally means ‘stand; stand up’, although the Kamloops Wawa literature uses it for when the dead are resurrected at the Second Coming of Jesus. Normally for ‘get up, wake up’ from sleep, you say gitə́p.

[6] < qualisum > : This pronunciation of the usual kwánisəm is quite neat, because it could only have been learned from the actual speech of northwest Oregon Native people, who famously alternated their N’s & L’s to the perplexity of Whites. When I check against the many compiled old wordlists in Samuel V. Johnson’s 1978 dissertation, I find no example of any published source that used the “L” pronunciation of this word.

← Dr. John Scoulerʹs journal & the expansion of Jargon beyond the lower Columbia
3rd week of Advent: a Bible reading →