If you care to cut through a couple of stereotypes, this clipping actually documents one of the intercultural uses of Chinuk Wawa that you hear less about…

Chinese immigrants and Native people often had only the Jargon at their disposal to communicate with each other. Since neither group typically could write in English or owned printing presses, you have to root around in settler newspapers and such for the odd mention of these contacts.

The “Chinese” language here is actually Chinese Pidgin English: “sabe” = “to know”, and “all same” = “like that; identical”. Let me make my preceding comments more specific now, by pointing out that there is plenty of evidence of CPE getting blended with Chinook Jargon on the frontier. 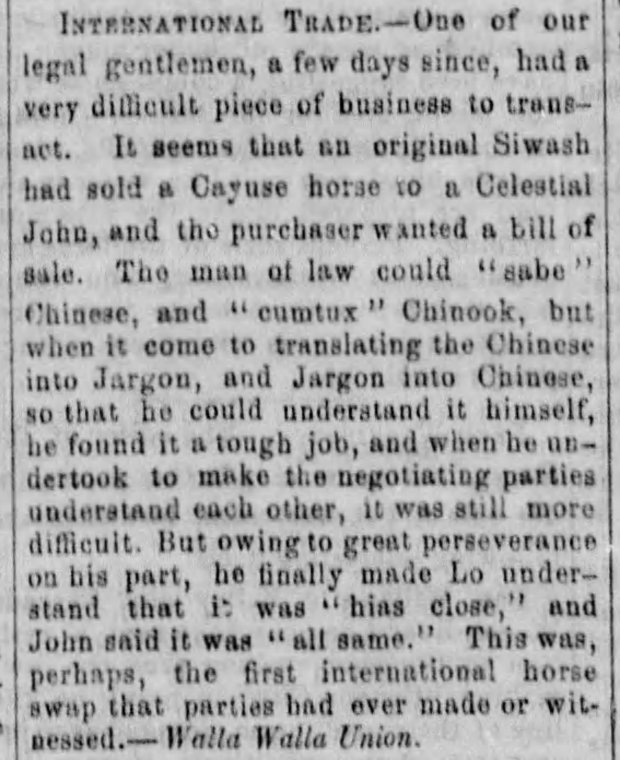 One of our legal gentlemen, a few days, since, had a very difficult piece of business to transact. It seems that an original Siwash had sold a Cayuse horse to a Celestial John, and the purchaser wanted a bill of sale. The man of law could “sabe” Chinese, and “cumtux” Chinook, but when it come [sic] to translating the Chinese into Jargon, and Jargon into Chinese, so that he could understand it himself, he found it a tough job, and when he undertook to make the negotiating parties understand each other, it was still more difficult. But owing to great perseverance on his part, he finally made Lo understand that it was “hias close,” and John said it was “all same.” This was, perhaps, the first international horse swap that parties had ever made or witnessed. — Walla Walla Union.