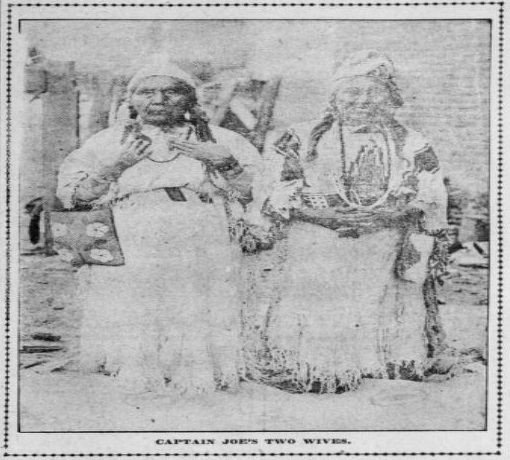 Another case of the actual Chinuk Wawa words telling a different story from what the Whites claimed they meant!

This was a little ways upstream from the places I’ve been talking about…after the article you’ll find my commentary.

With Two Wives in Trail, Captain Joe Seeks Forbidden Friends After 25 Years of Exile for Horse-Stealing at Ellensburg.

ELLENSBURG, Wash., Nov. 23. — (Special.) — Followed by his two wives, who, like himself, were bent and aged, Captain Joe [Neekowit, leader of the Methow Salish tribe], the sole survivor of the murderous band of savage warriors that aided old Chief Moses during the stirring times of 1878, rode into Ellensburg this week from his ranch on Twisp Creek, in Okanogan County, where he has resided since he was banished from the Kittitas Valley by the white settlers. Captain Joe has not been in Ellensburg since the time that he was detected in the act of stealing old Toby‘s [see photo below] horses, for Toby, although a redskin, was a friend of the whites, and Captain Joe was forbidden ever again to set foot in the Kittitas Valley unless he was willing to take a chance of being hanged.

When Moses, together with Chief Joseph [see “Chief Joseph’s Words to Me, and What I Think They Mean“], the Bannock and Piute Indians, started on the rampage that terrorized the whole Northwest in the Summer of 1878, Captain Joes [sic] was Moses’ right hand man and, although accepting the hospitality of the white settlers of the Kittitas and Yakima valleys, was filled with a deep hatred for the race that had taken the land from his forefathers. Prior to the uprising, Captain Joe had been employed by J. L. Vaughn, who made the first wagon tracks in the Kittitas Valley, and who was the first postmaster here. When told of Captain Joe’s visit, Vaughn expressed regret that he had not seen the Indian, stating that he remembered the old warrior and that he had thought that Joe had long been dead.

In 1878. when the handful of settlers in the Kittitas Valley were hearing wild rumors of the depredations being committed by Moses and his savages, the block now bounded by Main, Pearl, Fourth and Fifth streets, which is valued at $100,000, according to the County Assessor, was the center of a huge stockade, which was erected to provide for the women and children of the valley settlers. Practically the only buildings outside of this stockade were a few log cabins. Captain Joe remained in the midst of the whites, professing to be friendly, but in reality watching and waiting for a signal from the Wenatchee Mountains from Moses, who was to sweep the valley. Moses failed to appear at the specified time, and Captain Joe disappeared from the settlement, joining his chief in the hills. Later, when it became apparent to all that the uprising had failed and that the Piutes and Bannocks were unable to get across the Columbia, Captain Joe drifted back to Ellensburg. Toby, with his faithful wife, Nancy, was at all times friendly to the settlers, and Captain Joe endeavored to vent his emnity [sic] against the white [sic] by running off with Toby’s horses. Old Toby was gradually growing blind and did not realize that his bands were being depleted. Captain Joe was caught while making away with Toby’s horses and warned to leave the valley for good.

Yesterday, after an absence of over a quarter of a century, the old warrior rode into town, searching for familiar faces and the old landmarks that have disappeared. His two wives, dressed in all their finery, followed the old buck as he rode to a hitching rack, and when he dismounted they likewise tied their horses and came after their master. Feeble-eyed, Captain Joe tottered down Main street, peering into the shops and stores, until he came to T.W. Farrell’s harness shop [see excellent photo at that link], where he stopped.

“Syz tillicum” (stop, friend), said the pioneer harnessmaker to the Indian, and Captain Joe’s toothless mouth broke into a smile. 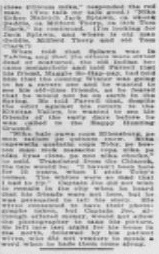 When told that Splawn was in Yakima and that the others were either dead or scattered, the old Indian became melancholy and told Farrell that his friend, Maggie So-Hap-pay, had told him that the coming Winter was going to be a severe one [see “Another Indian Winter Weather Forecast“] and he wanted to see his old-time friends, as he feared that he would not be on earth in the Spring. He told Farrell that, despite the edict against his return to the Kittitas Valley, he wanted to see his friends of the early days before he was called to the Happy Hunting Ground.

“Nika halo yawa copa Ellensburg, pe mox tatlum pe quinum snow. Mika [sic] capswalla queintin copa Toby, pe boston man muk [sic] masache copa nika pe nika hyas close, pe noe nika chocko,” he said. Translated from the Chinook, the tale would be: “I haven’t been here for 25 years, when I stole Toby’s horses. The whites were so mad that I had to fly.” Captain Joe did not wish to remain in the city when he heard that his friends were not here, but he was persuaded to tell his story. His wives consented to have their photographs taken, but Captain Joe, although offered money, would not allow the photographer to take his picture. He left late last night for his home in the north, followed by his patient wives, who did not venture to speak a word when he bade them come along.

First off: a photo of Old Toby and Nancy. 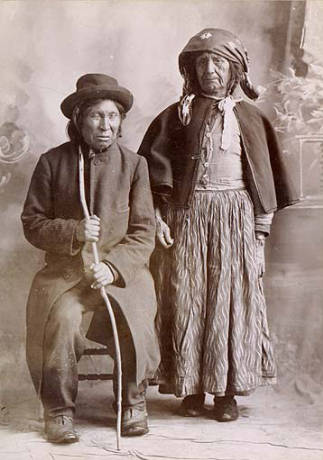 Next order of business: we need to point out that Captain Joe was asking for people, in Chinook Jargon, by their nicknames. This goes hand-in-hand with the colloquial nature of pidgin languages. It’s got everything to do with how the Jargon added more English words of the nature of jawbone ‘credit; loan; debt’ and hightone ‘excellent’ and far fewer of the type of quantum physics and morphology.

Now: Captain Joe’s actual words appear to have been recorded with good accuracy. They reflect how the Salish people of north-central Washington spoke Chinuk Wawa in those days. (See “From Copenhagen to Okanagan“.) But the editor of the newspaper, I think, is responsible for the fact that they’re given a translation that’s somewhat slanted against Indians. Read the following analysis of the CW dialogue to see how.

My best, but hazy, guess about this < syz > is that it could’ve been a local Chinook Jargon word from Methow-Columbian-Nxaamxcin Salish; I find no comparable form in Ellensburg’s local, unrelated Sahaptin. Compare from Anthony Mattina’s “Colville-Okanagan Dictionary” cíʔ-skʷ ‘stop doing’ (Imperative form). Command forms often wind up extracted from the common flow of speech to become words in pidgins.

The rest of the Jargon today is from Capt. Joe himself:

In the preceding, the speaker uses the Chinese Pidgin English-style < allsame > ‘like’, which is frequently used in his people’s dialect of Chinuk Wawa at the expense of the older kakwa.

In that utterance, < itch > is again something novel and mysterious. You might compare it with the local Sahaptin nch’í ‘old; [literally] big’. (Various regional languages, such as I recently showed for Lower Chehalis taw, use the word for ‘big’ to mean ‘old’ or ‘grown-up’.) The word could be a typographical error for the not-infrequent spelling *< icht > of Chinuk Wawa’s íxt ‘(the) one; (the) other’, as though the speaker were pausing: ‘…where’s that other guy, Tom Clark?’  The best match I’ve got for a related concept in any Salish dialect that Capt. Joe might have spoken is (from Dale Kinkade’s “Dictionary of the Moses-Columbia Language”) s-xʔítx or s-xə-xʔítaʔx ‘oldest’ — so this may be an additional instance of local Salish entering local Jargon. I just don’t know how a native speaker would use that word, so its plausibility is unclear to me.

pe nika hyas close, pe noe nika chocko”
pi náyka hayas-ɬúsh, pi ??? náyka cháku
and I Intensifier-good, and ??? I come
‘but I was just fine, and ?now? I’ve come (back).’
Editor’s translation: ‘I haven’t been here for 25 years, when I stole Toby’s horses. The whites were so mad that I had to fly.’

So there’s one mystery word in this last fragment as well: < noe >. Nothing in Salish or Sahaptin appears to my mind as a match for this. My first guess is that it’s English ‘now’, which I’ve also seen in Interior Salish use of Chinuk Wawa (in British Columbia). I don’t see that < noe nika chocko > could possibly mean ‘I had to fly [flee]’. If anything reflected that meaning, it would be the preceding < nika hyas close > IF there’s an inflected motion-verb erroneously left out there, like * < nika kuli >, thus all together hypothetically giving *’I really had to run away’. That analysis strikes me as awful tortured. It’s simpler and more believable to take < noe > as ‘now’.

So today we’ve seen yet again that even a short sample of vintage Chinuk Wawa can tell us a signficant amount about how the language was really used. Captain Joe’s way of talking looks like straight-up Interior Washington dialect Jargon.