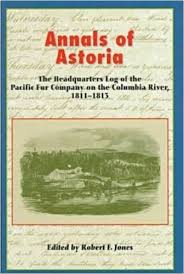 1813 would be early evidence for extensive Chinook Jargon use.  On this point, I’m in agreement with Robert Francis Jones, the modern editor of “Annals of Astoria: The Headquarters Log of the Pacific Fur Company on the Columbia River, 1811-1813” (Fordham University Press, 1999).  Jones astutely singles out the following passage:

[June] 15th [1813].  Tuesday.  Visited by [Chinookan chief] Comcomly, his son & suite, bringing with them Joseachal the Queenhilt [Quinault Salish] Indian who was on board the ship Tonquin when destroyed, and whom we have so much wished to see for the purpose of learning from himself the particulars regarding the transactions that took place on board before and at the time she was destroyed.  He appeared quite an intelligent Indian, and by means of Comcomly’s son as an interpreter & his own knowledge of Chinook with a smattering of English made us acquainted with many little circumstances respecting the proceedings on board.  But throughout was only in matter a confirmation of what we had learned long before.

Supervising partner Duncan McDougall, the logbook writer here, goes on with quite rich details of the Tonquin incident, which suggest to me that the Whites were understanding the Native people’s various tellings of it.

But it’s the paragraph we’re spotlighting above that’s really the good evidence for efficient interethnic communication just 7 years after Lewis and Clarke’s visit.

Editor Jones footnotes it this way:

This paragraph gives an unusual and interesting look at the difficulties of communication in the Pacific Northwest at the time.  Notice that McDougall’s interview apparently involved using Chinook, i.e., the trade jargon of the area, the native Chinook language, and “a smattering of English.”

I don’t view McDougall as claiming that anyone was speaking “the native Chinook language” — read on.  But Jones is quite right to perceive that we have here some really fascinating evidence for the use of the pidgin, Chinook Jargon, and at a point so early in the contact phase that CJ was an urgent solution for communicating in some newly established crosscultural contacts.

Retracing our steps for a moment: Lewis & Clark are typically seen as an epoch-making initiation of Native-White contact, and they definitely documented events while on the coast in a way that implies Chinook Jargon use.

The doubts that can be raised about that claim focus on the fact that most of the same utterances recorded by L&C that we can recognize as containing Jargon words can just about equally well be described as the pre-existing Nootka Jargon, with some English words added.  (Clouch musket, wake kumtux musket.)

That objection would make us wonder whether Chinook Jargon did exist yet as a separate language back in 1805-1806.

Myself, I begin answering objections of that kind by pointing out specifically the documented use of phrases that include originally-Chinookan words, like tyee kamoshak “chief beads”.  (I’m not bothering looking up L&C’s spelling of it, but I clearly remember the phrase.)  Chinookan words, we presume, were never a part of Nootka Jargon — but we know they were a key component of CJ.

And then there’s the clear picture from L&C of the Whites particularly identifying the locally-used language that they succeeded at learning and using with the “Clatsop” Chinookan tribe.  This too presents us with a Chinookan-based pidgin rather than some Nootka Jargon variety.

But we still hope to strengthen any claim that the Jargon existed so early.

Which brings us forward again in time, to today’s passage.  The Salish (non-Chinookan) man Joseachal efficiently communicated with the recently arrived Whites using what’s represented to us a blend of elements from two languages that aren’t native to him: Chinookan and English.  To my mind that would describe Chinook Jargon.

Concomly’s son functioning as an interpreter can additionally, if more weakly, suggest Chinook Jargon use.

Joseachal probably didn’t know Chinookan itself, which was the language of Concomly’s family; that language is consistently documented as being considered unlearnable if you didn’t grow up with it.

I can imagine that at least some of the repertoire that Concomly’s son shared with Joseachal would’ve been words of łəw̓ál̓məš (Lower Chehalis Salish).  That’s the language most closely related to Joseachal’s Quinault.  And most or all Lower Chinookan (Shoalwater) towns were bilingual in Lower Chehalis.  This is why there’s a very big łəw̓ál̓məš component to the Jargon from early days on.  In these facts I see potential reasons for suspecting the Jargon was used between these two men.

Summarizing before a mountain gets made out of a molehill, McDougall’s anecdote really does lend some support to the notion that there was such a thing as a Chinook Jargon separate from any other idiom, by as early a date as 1813.