Father St Onge writes from his deathbed, in Jargon

A strangely unsung figure in Chinook Jargon history writes from his deathbed, in Jargon, in 1898.

Father Louis-Napoléon St Onge, OMI (b. 1812), had apprenticed as a young missionary with the now better-known Fathers Modeste Demers (1809-1871) and François Blanchet (1795-1883), becoming fluent in Sahaptin (Yakama) and Chinook Jargon. 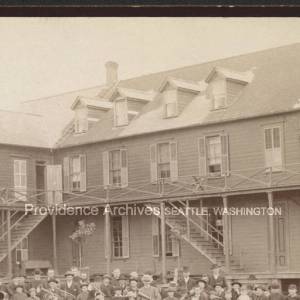 Important to know: early in his Northwest years, St Onge was a teacher of philosophy, astronomy, and other subjects “in the Holy Angels College” (established 1850), Vancouver, Washington Territory.  This assuredly exposed him to the children of the fur trade-centered, ethnically mixed community that first creolized Chinook Jargon.

I’ve been working on St Onge’s huge manuscript dictionary of the Jargon, and it clearly reflects some of the earliest documentation of a variety that’s more like the Chinuk Wawa creole of Grand Ronde than any of the pidgin varieties we know of.  For a small taste of his Jargon, you can peek at the “regional Jargon” section of the 2012 Grand Ronde dictionary.

A big reason that I say St Onge was tremendously important in the history of this language, besides the voluminous and previously unresearched documents of Jargon that he created, is that he loaned his materials to Father Le Jeune as a resource for writing the latter’s hundreds of pages of shorthand newspaper and books as expressively as possible.  St Onge’s influence on the famous Kamloops Wawa‘s phrasing and vocabulary is quite strong.   St Onge was also an enthusiastic correspondent in shorthand Chinook (Chinuk pipa) with Indians of BC’s southern interior.

(The best biographical sketch of St Onge seems to be the one in James C Pilling’s 1893 bibliography of Chinookan languages.  Sadly, it lacks dates for many events in this interesting man’s life.)

pus naika mamuk chako wam klaska. Naika
for me to warm them.  I

pi kaltash. Mokst naika lipii chako
but it doesn’t work.  Both my feet have gotten

chako doktor; iaka wawa: “Wik
called a doctor; he said, “There is no

maika kopa aias skul haws, pi maika
you to the university, and you

oihat. Tanas lili klaska chako
vessels.  For a while they

kopa klaska. Tlus pus msaika
about them.  You folks should

pus wawa mirsi kopa iaka, kopa
to thank him for