A previous post of mine made a sideways mention of botanical luminary David Douglas’s presumable Chinuk Wawa name.  He was said to be called “Grass Man”, I suppose Tipsu Man, in Jargon although I don’t find that phrase anywhere, by Indians of the lower Columbia.

A detail that I find interesting is in Jargon speaker Jim Atwell’s book “Columbia River Gorge History Volume One”.  Atwell retells the story as “David Douglas Meets My Cousins“, crediting Chief Cockqua with these words,

Cockqua, in my understanding, was a łəw̓ál̓məš / Lower Chehalis Salish leader, and not (exclusively) a Chinook as so many books describe him.  Douglas describes him as “the principal chief of the Chenooks and Chochalii” ( = ‘Chehalis’) on July 19th, 1825.  This I mention out of a sense of duty to reinstate the łəw̓ál̓məš people to their imperfectly documented major role in early Chinook Jargon history. 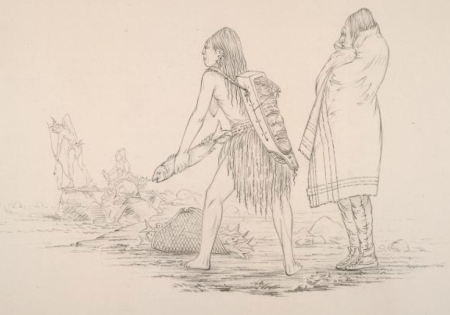 At the Dalles (George Catlin)

Douglas’s own published journals mention this “Indian name” of his (page 159, March 24, 1826, at the Dalles) in a way that connects it both with the inland Cayuse people and with yet another name of his, in a situation where he says Chinook Jargon was the medium:

This very friendly Indian, who is the finest figure of a man that I have seen, standing nearly 6 feet 6 inches high, accompanied us a few miles up the river, where we camped for the night, after being remunerated by Mr. McLeod for his friendship–I being King George’s Chief or the Grass Man, as I am called.  I bored a hole in the only shilling I had, one which had been in my pocket since I left London, and the septum of his nose being perforated, I suspended it to it with a brass wire.  This was to him the great seal of friendship.

A good read of a page at BC Book Look tells us also:

Douglas was initially distrusted and feared by some Indians for his strange habits, such as putting spectacles on his nose, tea-drinking and lighting his pipe by using sunlight and a magnifying glass, for which he gained the nickname Olla-Diska, Chinook jargon for fire. As his motives became better understood, he also garnerned the nickname “Grass Man.”

‘Olla-Diska’ is clearly a misspelling of the more recognizable Olla-Piska or, as the Grand Ronde dictionary gives it, úləptski.

This is an originally Chinookan word that lost out in the war of words that established a fairly standard Jargon vocabulary.  Paya from English won that competition; another loser was met-chip, the łəw̓ál̓məš term for ‘fire’.

So David Douglas was the recipient of 3 names in Chinuk Wawa:

This is probably a sign of just how early in the Native-Newcomer contact history he spent his Northwest years.  Not that many people were given purely Jargon names, and most of the folks who had them lived in the first half of the 1800s.

Not too much later, by the 1850s, plenty of people had Chinook Jargon names, but with the difference that those were a combination of Jargon words with European names.  So you had blends like these:

History in a few words!