A council, a hanging, a witness: government words

Chinuk Wawa was used in frontier courts, in making treaties, in dealing with the cops — all the functions of the Official White-Aboriginal interface. 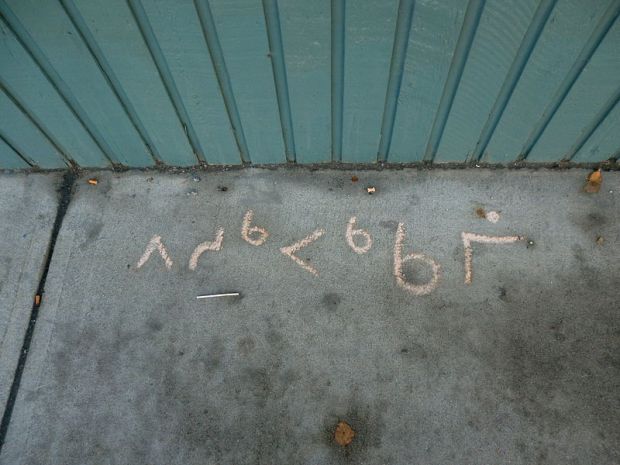 (The image is not Chinuk Wawa.  It’s graffiti in Yellowknife NWT, standing in for the Dakelh-language Barkerville jail graffiti that I don’t have an image of but wanted to use as a stand-in for the Jargon.)

Devastatingly, this “trade language” was accorded little respect by those who were most dependent on it in these contexts.  So we have hardly any documentation of what precisely folks said, and how.

Court records typically summarize in English what a person said in Jargon in their testimony.  Much the same is true of treaty minutes, parliamentary hansards, that kind of thing.

Exceptions occurred.  Their rarity proves the rules.  A couple of written appeals in Jargon survive to this day from assemblies of Aboriginal chiefs.  There are scraps of preserved “Chinook” speech in news reports and collections of case law.

Herewith I give you a number of hwait-man–government-related words in Jargon that are probably unfamiliar to you.  I have come across these in the vast 1890s Chinuk pipa shorthand literature — from Aboriginal writers and the Kamloops Wawa newspaper’s accounts of current events.

(So these will be in the kinda-phonetic spellings that you get in the shorthand.)

The European idea of government is not infrequently expressed by taii (“chief; leader”) this-or-that; there is aias taii kopa Kanada (“big leader in Eastern Canada”) for example.  these taii‘s explicitly include legislators, expressed in Jargon as the people who make lo or la (“laws”) for us.  (The regulations of a nongovernmental kompani [“organization; group”], such as a temperance society, are referred to as kakwa lo [“things that are like laws”].)  Just as often, I think, I see the words govirnmint or govni used for the institution, the latter one being either a misspelling or, less plausibly, coming from “governor”.  There is also such a thing as a kawnsil [“council”].

In your dealings with the white man government, you’d probably be asked to give your nim kopa hwait man (your “name for white people’s purposes”) or your nim kopa govirnmint (“name for the government’s purposes”).  Your sawash nim (“Indian name”) might be unwriteable and therefore devalued.

Contrarily, individual offices of power are rarely distinguished in the Jargon I’m familiar with, but there are references to the British kwin (“queen”) or the king, sometimes to the American prisidint (“president”) that are usually accompanied by an appositive explanation that this is an aias taii kopa Washington (“big leader in Washington”).  I have read references to sinitirs (“senators”) but that’s in connection with ancient Rome only!

When it comes to the branch of government that you’d have the most direct contact with, the polis (“police” with their officers the polis man [“policemen”]) as well as the village-level wach man (“watchmen; guardians”), we naturally hear more.

To be arrested is pretty much when the polis man tlap maika (“the policemen catch you”).  I don’t know how folks would be informed of the charges against them in Jargon, but they’d be totally clear on the concept of tlap skukum haws (“getting jailed”) and of being skukum haws (“imprisoned”, adjective) in the nearest skukum haws (“jail”, noun).  If you were released, that was clear too, as you chako klahani kopa skukum haws (“came out of jail”).

If such was not your luck, though, you’d be hauled in eventually to a kort haws (“courtroom”) to defend yourself.  There, a chyuch (“judge”) would hear you and any witnis (“witness”) that the prosecution and defense brought in, before making a decision about your fate.

If your luck really ran out, they’d mamuk rop (“hang”) you.

That’s all I know now.

← “Carryall”, Jargon sleighs, & French influence
How to say to yourself “Don’t kill yourself” in Chinook Jargon? →