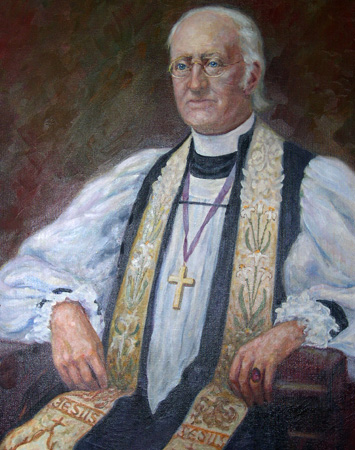 Some 500 ‘books’ of such syllabic productions were said to have existed in the late 1880s at the Oblates’ headquarters in New Westminster (Kamloops Wawa 1916).  [cited in my dissertation]

There’s also the much-rumoured “opera in Chinook“ said to have been performed at Port Townsend, Washington .  That one has remained so hard for me to track down that I’m almost ready to call it apocryphal — just to piss people off enough to send me  proof of its existence!

Well, here’s another “lost Chinook” story that I’m inclined to, well, put my faith in because the people involved weren’t big jokers…

The Chinook jargon is the Indian trade language of the Columbia river region and the adjacent Pacific coast from California far up into Alaska. It was first brought to public notice in the early days of the Oregon fur trade — about 1810.

The Right Rev. Alexander Charles Garrett, bishop of Dallas, Northern Texas, translated in 1862, while missionary at Victoria (1861-67), on Vancouver’s Island, portions of the Prayer Book into the Chinook jargon; but the jargon was so hopeless that he never printed a line. The bishop informs me (July 29, 1912) that “the MSS. has long since disappeared.” Garrett was born in Ireland, November 4, 1832. He was ordained priest in 1857. In September, 1859, he sailed as a missionary to British Columbia, where he remained for ten years. The Indians in his charge were a small resident tribe (about 200) of Songes or Tsau-miss, belonging to the great family of the Cowitchins (Cowichan), a group of Salish tribes. Many other neighbouring tribes came to the settlement. Thus the missionary was obliged to use Chinook. In later years Mr. Garrett was a rector, and subsequently bishop of Dallas, Texas, in the Episcopal Church of the United States.

Related posts in this blog that reinforce this tale by discussing Garrett and Jargon:

Chinook’ll Get You to Yale, French to Kamloops

← What do you call a meteorite in Chinook Jargon?
Cathlamet on the Columbia →