A history of central Washington that relies on, but ignores, a Salish chief

This blog post is fondly dedicated to the memory of M. Dale Kinkade.

Hull, Lindley M.  1929.  A history of central Washington: Including the famous Wenatchee, Entiat, Chelan and the Columbia Valleys/ With an index and eighty scenic-historical illustrations.  Spokane: Press of Shaw & Borden Company.

This book, mentioned in my blog post on the Roslyn Museum, is just jammed with biographical and historical information on early pioneers in this late-settled region of Washington state.  Its style is no-nonsense, making it a less than flowing read. 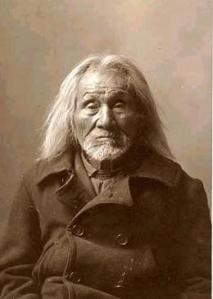 There are many mentions of an Entiat Salish leader, Indian Silico, otherwise known as Chilcosahaskt or Silico Saska, who is memorialized in the title of the high school yearbook in Entiat, WA.  (“Catch the Entiattitude”, says the town website, which also claims it was first settled by Chinook Indians in the early 1800s.) 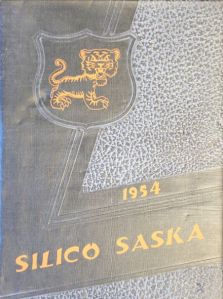 But tellingly, these anecdotes aren’t tallied in the Index.  But Silico Saska was, relevantly for us, a speaker of Chinook Jargon.  The following quotation of him speaking to a settler woman and her doctor husband is found in William D. Layman’s 2002 book Native river: The Columbia remembered / Priest Rapids to the international boundary, page 79:

By, by dry it, mamomuc. By by four moon, ketchum snow, cultus til licums stop nica house. Potlatch mamomuc.

That book translates this as, “when the next snows came, relatives whom Silico did not like would come to live off him. He would give them porridge…”  Silico’s CJ is typical of the Jargon in use in the interior in the late 19th century, resembling what we know from sources around Kamloops, Ellensburg and the Okanogan memories of Ulrich E. Fries: It’s interlarded with pidgin English features like by by, -um and stop.

Back to the History of Central Washington.

Page 328: “Mrs. Charlton, Judge Chase’s daughter, relates…’My father was secretary-treasurer of the then new Peshastin Ditch…Every day men came to ‘wah-wah‘ about the ditch or to pay assessments.”  (A CJ loan into local English.  Where this one exists, it’s usually used like this–as a synonym for ‘palaver’.)

Page 398: “First Settlers:…On Chikiman (money) creek for an unknown time there lived Al W. Purdy, of whose coming and going apparently no trace has been left.”  (A CJ place name, perhaps old for this region–1880s or so.)

Page 407: “Entiat and Orondo early history:…In 1868, George W. Parrish, father of our well known Tom Parrish, accompanied by a man named Doner, made a trip from what is now Ellensburg to the Entiat country, traveling via Blewitt Pass, Peshastin Creek, down the Wenatchee River to what is now Cashmere, thence up a canyon and over a ridge to the Swaukane Creek, down this stream to the Columbia and so on up to the Entiat.  Here they found a very large and very black negro [sic], Big Antoine, washing gold by means of a  ditch from the Entiat…Big Antoine appeared to have been an Islander and educated in England to be the valet of some man of distinction.  He could speak English, French, Spanish, and Indian.  He had been in the country of the Red River of the North, probably with the Hudson’s Bay Company. He had run away coming to the Entiat Valley from San Francisco.” (Did Big Antoine speak Chinook Jargon? His biography makes it likely he could have picked up some other Indian language such as Cree.)

Page 413: “They then turned their attention to a man in the Wenatchee Valley who was called ‘Hayman‘ by the Indians.”  (Is this a rendition of his actual name, or a Chinook Jargon name ‘hay man’?  The word ‘hay’ was used in CJ at the time around Kamloops.)

Page 445: about the “early history” of Entiat Valley: settled in 1887, still considered by Silico to be “his” territory as he routinely informed settlers.  “Many of the settlers acquired a speaking knowledge of the Indian tongue, and children in school forgetful of their surroundings were apt to reply in ‘Siwash’ when spoken to.”  (This is clearly Chinook Jargon.  Always fascinating to hear more about kids growing up with CJ!)

Page 451: The Lost Mine: “According to a story of Indian Silico, told to W.F. Cannon, two white men in pre-settlement days went far back into the mountains from the Entiat and found gold…Indian Silico, in speaking of these men said they were ‘Hiyu Boston men.’ “

One thought on “A history of central Washington that relies on, but ignores, a Salish chief”