The Cowlitz métis and Chinuk Wawa

One source for information on the métis descendants of Fort Vancouver is the “Summary under the Criteria and Evidence for Proposed Finding: Cowlitz Tribe of Indians” (Bureau of Indian Affairs document, February 12, 1997). 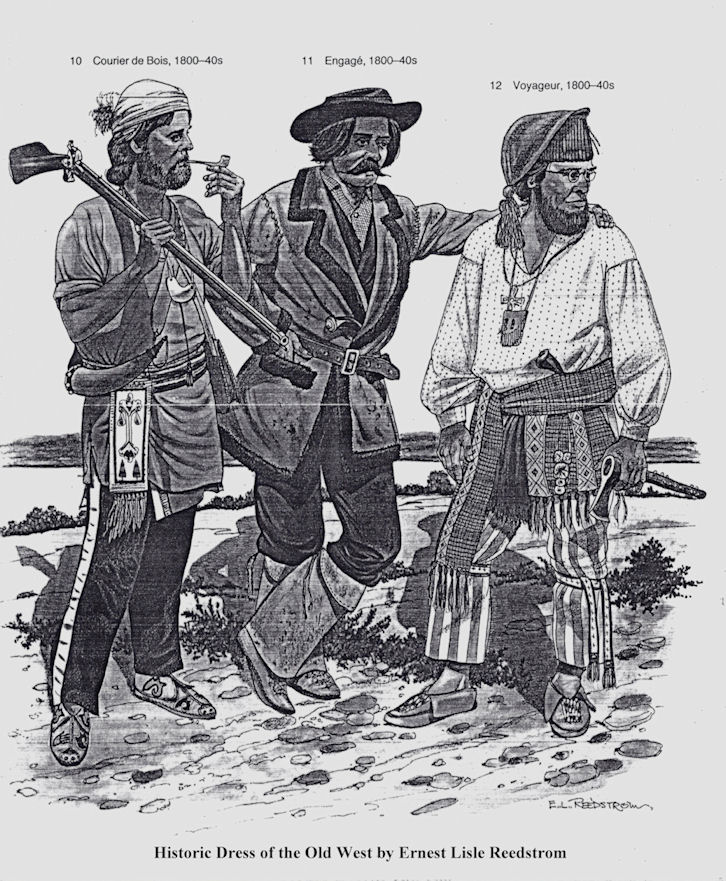 Kind of a generic illustration of Canadians in the West (image credit: Oregon Pioneers, which lists many Cowlitz-area francophone settlers)

This is a voluminous document of testimonies from many people who identified as members of the Cowlitz Tribe. Given the particular currents of ethnic relations here in the States, many métis wound up being considered as tribal people.

It tells you a lot about our region’s history that, as this document illustrates, the Cowlitz métis were very often referred to as “Canadians” in frontier times, and later variously as “Halbreed”, “Indian”, “White”, “Mixed”, and even “Mulatto”.

There are family ties between the Cowlitz métis and the historic Red River Colony in Assiniboia (Manitoba) in Canada (cf. page [437]) — that is, with the typically understood capital-M Métis people’s homeland.

On page [84] we see mention of what should be a well-known fact to students of Pacific Northwest history, that Hudsons Bay Company retirees had already been settling on Cowlitz Prairie prior to the 1839 establishment of the HBC/PSAC Cowlitz Farms. This makes the métis families essentially the first settlers in what’s now Washington State.

In today’s post I just want to share a few snippets of Cowlitz métis history and its intersection with Chinook Jargon.

Page [155] tells of a Nez Perce Shaker preacher married into the Cowlitz community, and fluent in the Jargon, which was a common language for the intertribal Shaker movement: 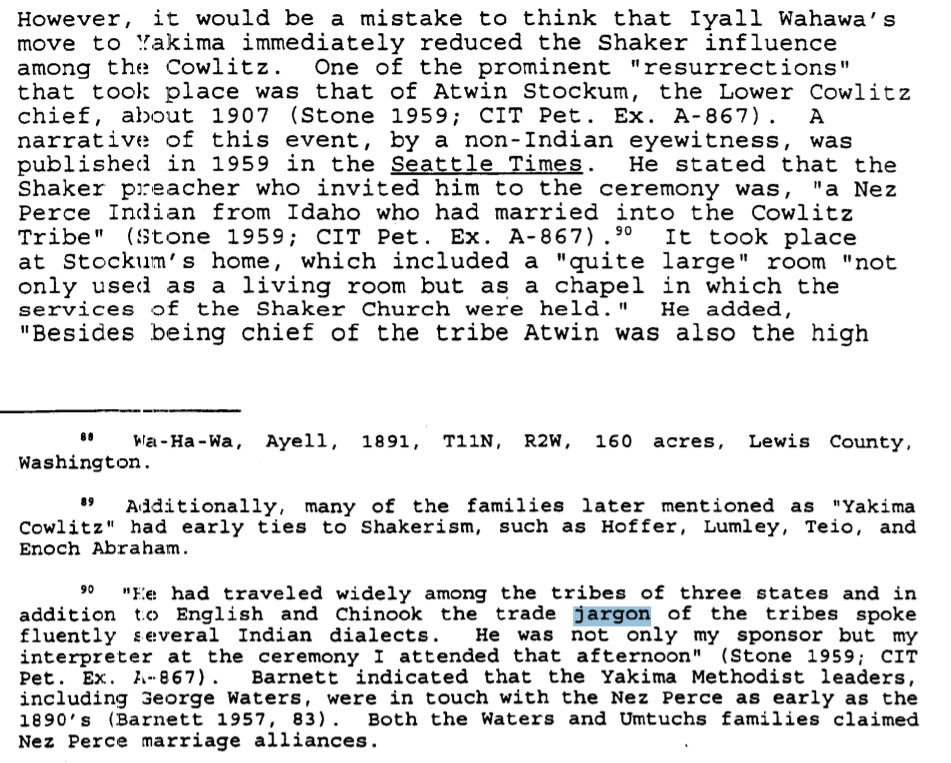 Page [237] tells us of Cowlitz métis families who “spoke French to one another and the Chinook Jargon to Indian neighbors into the 1940’s”:

Page [251] gives Mae Ernestine Purcell’s account of living in the 1940s with her French- and English-speaking grandparents, who spoke Chinuk Wawa with tribal neighbors:

And pages [267-268] has métis John Barnett’s recollection of a tribal meeting that was in part conducted in “Indian language”, which I would guess means Chinuk Wawa (as I’ve previously reported of a 1915 meeting) : 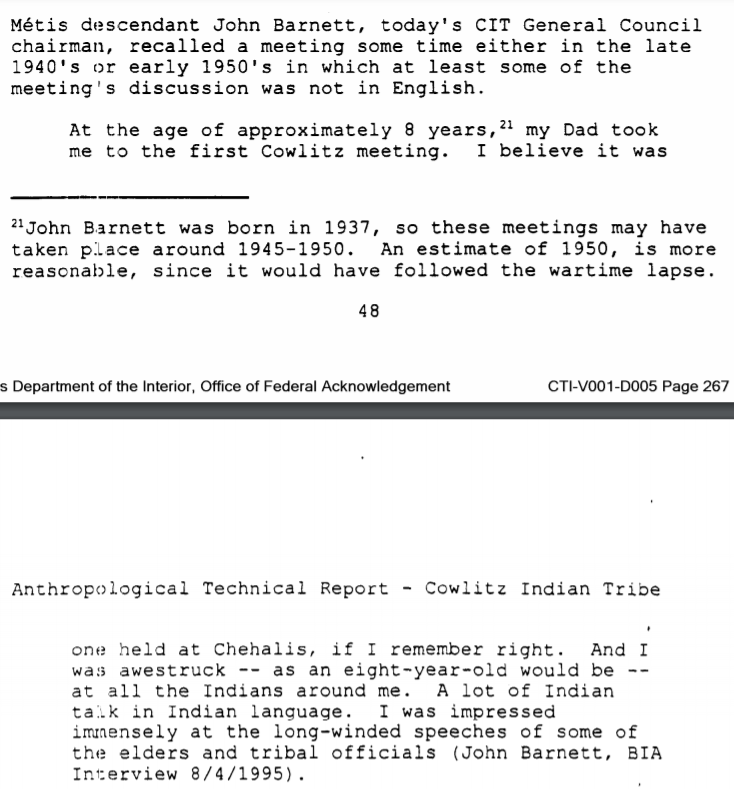 Page [387] reproduces one person’s 1989 affidavit swearing that the majority of the present-day Cowlitz Tribe are métis people: 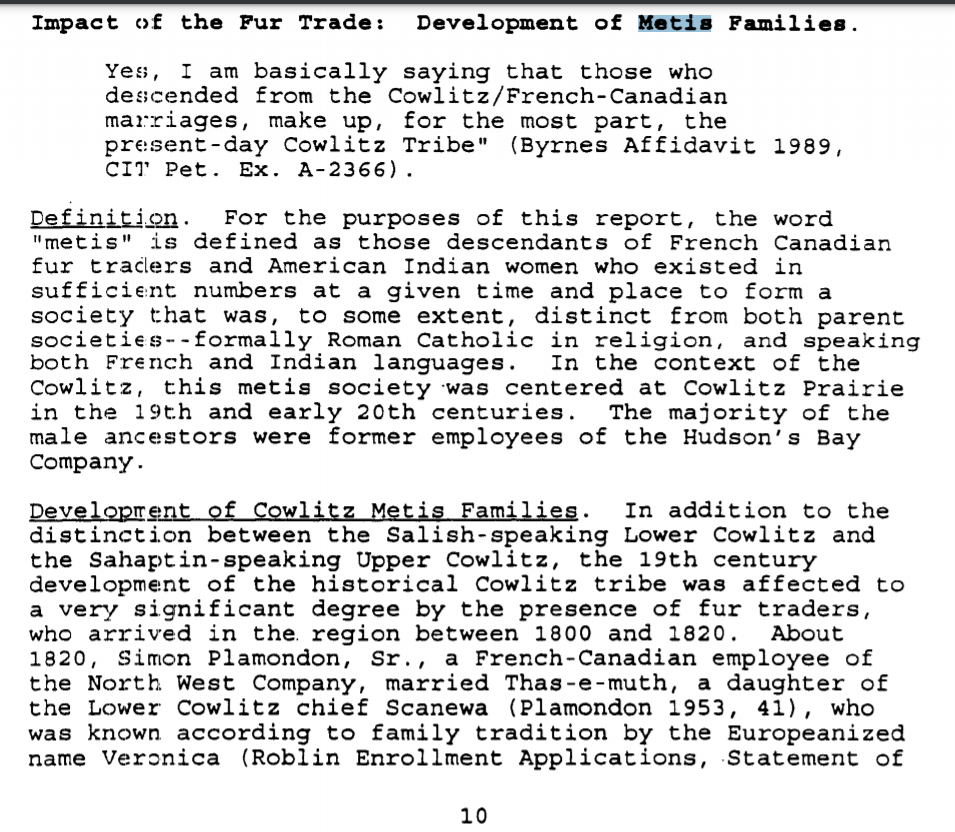 Quite similar to the way things have historically happened in Canada, métis people as a distinct group have often been invisible in a number of senses, both to their contemporaries and in the writing of history.

I think it’s a good idea for us to emphasize the big role they’ve played — much of it intertwined with Chinook Jargon — in shaping the Pacific Northwest.

There’s much, much more that’s of interest in this huge document; feel free to click the link above and browse in it.

One thought on “The Cowlitz métis and Chinuk Wawa”