Thanks once again to Alex Code of PoCo Heritage for pointing me to this example of oral history being preserved in Chinuk Wawa.

This is about events behind the naming of Dryad Point on the British Columbia coast. 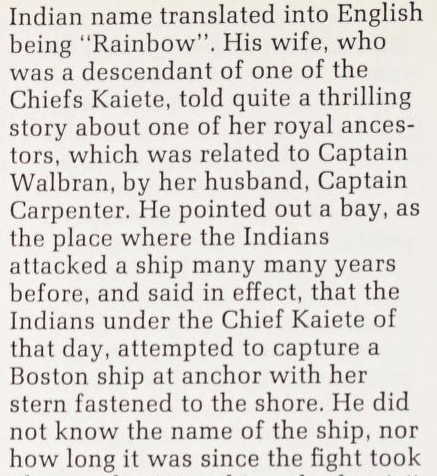 — from pages 70-71 of “Place names of the Pacific Northwest Coast: Origins, histories and anecdotes in bibliographic form about the coast of British Columbia, Washington and Oregon” by Lynn Middleton (Victoria, B.C.: Elldee Pub. Co., 1969)

That story tells itself!

I’ll single out the Chinook Jargon quotations for attention, though:

That’s solid Chinook, and with its relatively recent borrowing of English ‘Indian’, perfectly typical BC Chinook.

Really interesting, as Alex noted to me, to see history accurately preserved via the medium of spoken Chinook Jargon.

And it’s far from the first time that’s occurred!