A hat tip today to Jim Mattila, who has sent me some more historic articles that relate to Lushootseed speakers and Chinuk Wawa! 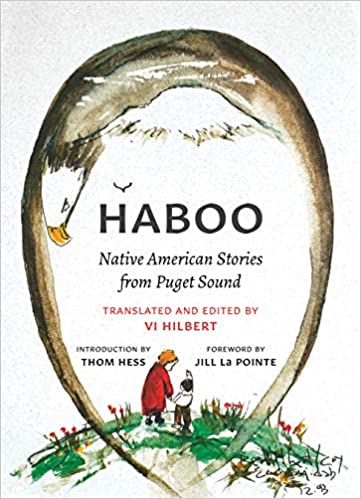 The above book is a good place to read more Changer stories, from a much more reliable teller (image credit: Amazon)

Today’s piece is one of the countless popular periodical articles that Walter Shelley “El Comancho” Phillips penned during a prodigious career.

It was published in Forest and Stream magazine, a source that has brought us a significant quantity of previously unknown Jargon material; this is from the March 9, 1895 issue, pages 183-184.

(If anyone reading this has specialized linguistic knowledge of that language, I want to ask you if that -(i)baɬ suffix is much used, or if it’s maybe archaic. I have reasons. LMK.)

I don’t reckon I’m going to transcribe this article entirely. It’s legible below.

But I will highlight a thing or two.

Page 183 mentions the “singgamble”, a local Puget Sound term for slahal that I’ve been suggesting may have been Chinuk Wawa.

On that page we also see Iwana John, a Native companion of Comancho, quoted as saying:

“A-a-h snugwillimie, has de-la-a-a-te ahncutty –” Oh, yes; I forgot; you don’t understand Chinook [this is absurd, as Comancho published a ton of good CW material! but it’s a conceit to accomodate the broader reading audience], so I’ll translate it. A long, long time ago”…

Taking a closer look at that:

Now, read on. I’ll talk to you again at the end of the story.

I have to jump back in and comment that < Too-lux > and < Quoots-hoi > are actually (Lower) Chehalis Salish words, known to us from James G. Swan’s 1857 memoir. So Comancho is, as typical for him, getting mighty fanciful.

His < Klook-wa > is kind of a puzzle, too. I would bet that Comancho is trying to use the Nuučaan’uɬ word (i.e. from a southern Vancouver Island Wakashan language) tɬ’eekoo ‘thank you’, once again going for “real Indian” color over strict local accuracy. This is a Nuučaan’uɬ word that plenty of Settlers found easy to pick up. I really don’t think Comancho is saying CW ɬax̣á(w)ya(m) ‘goodbye’ here!

As you probably know, < tilicum > is Settler CW for ‘friend’ — tílixam more often meaning ‘people; person; one’s relative’ for other speakers of Jargon.

One more neat fact, since we’re veering off into neighboring tribal lore: in Lower Chehalis Salish, the normal word for ‘deer’ is literally ‘the jumper’!

← hílu-tə́mtəm from Lower Chinookan
Resolved: single-word emotions are from Chinookan, multi-word from Salish →