…and today we read about one of their meetings in southwest Oregon. 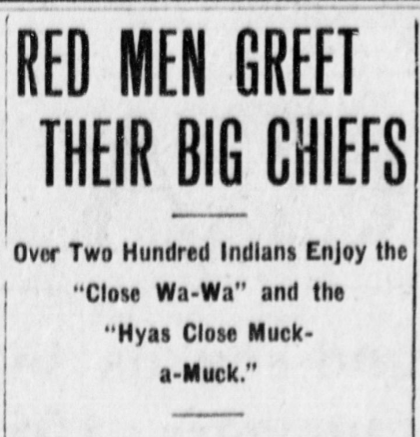 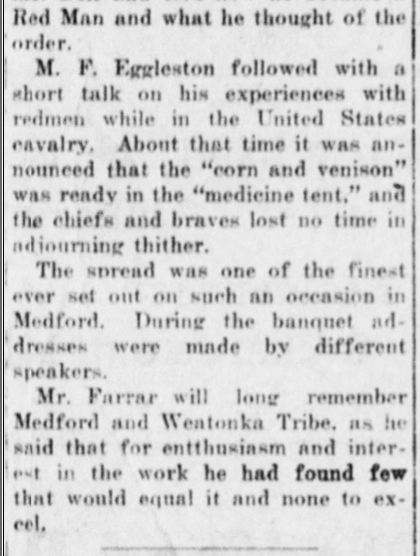 The Odd Fellows’ hall, which had
been rented for the occasion, was
filled nearly to overflowing Friday
evening by members from the hunt-
ing grounds of Ashland, Grants Pass,
Jacksonville and Medford, when the
sachem’s gavel fell and the council
fire was kindled.

Being a special meeting, the regu-
lar order was omitted and a “hijee
skookum wa-wa” [3] commenced at once.
Great Incohonee Farrar, the guest of
the evening, gave a comprehensive
history of the order of Red Men and
was followed by Walter Little, great
sachem of Oregon.

Brother J.R.U. Bell “happened in”
and made one of those brilliant and
witty short talks for which this an-
cient past chief and pioneer preacher
is noted. B.F. Mulkey passed back
a few compliments handed him by
Mr. Bell and told how he became a
Red Man and what he thought of the
order.

M.F. Eggleston followed with a
short talk on his experiences with
redmen while in the United States
cavalry. About that time it was an-
nounced that the “corn and venison”
was ready in the “medicine tent,” and
the chiefs and braves lost no time in
adjourning thither.

The spread was one of the finest
ever set out on such an occasion in
Medford. During the banquet ad-
dresses were made by different
speakers.

Mr. Farrar will long remember
Medford and Weatonka Tribe, as he
said that for entthusiasm [sic] and inter-
est in the work he had found few
that would equal it and none to ex-
cel.

“Close Wa-Wa” [1] is a CW phrase łúsh wáwa that local Settler English also borrowed for ‘(having a) good talk (with someone)’. From the many occurrences of it in old documents, I get the impression Settlers associated the first word with ‘close, near’, as in speaking quietly and seriously to a trusted friend.

“Hyas Close Muck-a-Muck.” [2] This is a standard phrase in CW invitations to events of the sort we’re examining here: ‘very good food’. In fact it’s likely the writer is quoting from a printed invitation throughout today’s article.

“hijee skookum wa-wa” [3] — This Medford newspaper is ridden with typographical errors in English, so it’s no surprise to find some in Chinuk Wawa also. The intended spelling was probably < hiyou > for the first word, giving us háyú skúkum wáwa ‘plenty of excellent words’. That is, skúkum was being used in the typical Settler sense of ‘very good’.