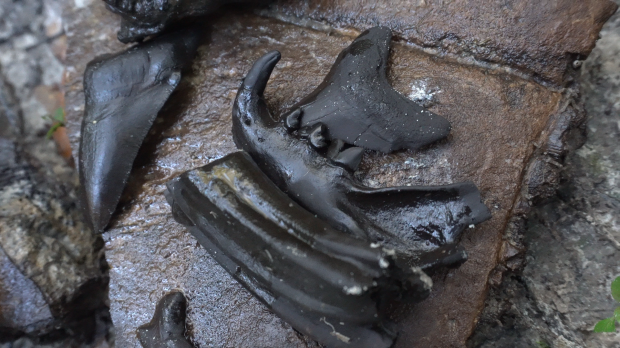 “Assortment of fossils found by us while free diving” (image credit: Reddit)

I’ve pointed out many times that the closest thing Chinuk Wawa has to a “passive voice”, parallel to English “I really got cheated”, is to literally say “they did it”.

Or, in the example sentence, say “they cheated me”, with a 3rd person plural subject.

I’ve collected zillions of examples of that “quasi-passive” in CW. (See also “Wait, But Don’t Wait for, the Origin of the Jargon Quasi-Passive“.)

Now I’ve come across at least one where “we” seem to give the same effect.

This is in the “Chinook Book of Devotions” (1902), in the section telling the parable of the prodigal son, whose main idea you’ve been exposed to if you’ve heard the hymn “Amazing Grace“:

= Naika tanas, maika kwanisim
my child, you always
‘My son, you have stayed’

yutl kopa ukuk maika aw iaka mimlus,
happy for this your brother he dead,
‘celebrate about this brother of yours who was dead,’

pi alta wiht nsaika tlap iaka.
but now again we find him.
‘but now is found by us.’

I won’t belabor the more technical linguistic elements of this — dude, it’s just a single example — but I find it real plausible to translate those last 3 words as a Passive.

The topic, and therefore in a real sense the “notional” subject, of the final 2 and a half lines is the prodigal son.

And AFAIK, us Northwest Indo-European speakers have a long tradition of Bible translation that puts this familiar passage into the Passive Voice in our languages. The translator, Father JMR Le Jeune, probably had the familiar “he is found” wording in his head as he did his Chinooking here. (« …festoyons, car mon fils que voici était mort, et il est revenu à la vie; il était perdu, et il est retrouvé’.»)

So it works for me to argue that we have here a nifty variant of the Jargon’s quasi-passive construction. Maybe we’ll try finding, and creating, more examples to check out how well people understand it.

← 1907: Suggested carnival names
The Catholic Digest tells about Chinuk Wawa shorthand…if you have the resources to access it →

4 thoughts on “Found: the Quasi-Passive, also in 1st-person plural”