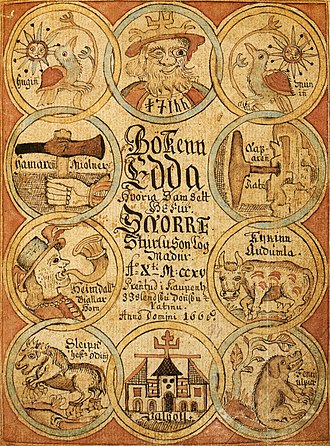 Snorre’s book of sagas as published in the 1600s (image credit: Wikipedia)

(See “Black and Blue, Kanaka Too! An Indigenous Metaphor“.)

In that article I inferred that the equation of dark skin with blue colour couldn’t be a European idea, since we don’t find it in the two major Settler languages that influenced Chinuk Wawa and PNW history.

In the time since, though, it’s come to my attention that BLUE :: DARK SKIN is in fact a Northern European metaphor.

And Scottish Gaelic, spoken by many of the numerous Scots who worked in the frontier-era fur trade, is a Northern European language. Could Gaelic potentially have influenced how “Kanakas” and Black people were spoken of out here?

When I asked for help with this on the Facebook group called “Pacific Northwest History (pre-colonial <1850s)”, a couple of people gave illuminating info.

Laila Eikeland Barr:
I don’t know Gaelic but do remember that Snorre Sturlason referred to this north African group as ‘blåmenn‘ (blue men). [I.e. in a Scandinavian Germanic language, in the 1200s AD — DDR.]

Sean Williams:
Fear (“man”) gorm (“blue”) is how you would desi[gnat]e a black man in Irish-Gaelic. If you called him a fear dubh (black man) it would mean he was a bad person.

So, if you’re still with me, we can acknowledge that Gaelic is a logically possible contributor of the “blue man” metaphor in PNW languages.

This would be the very first case where we’ve found Gaelic influence in Chinuk Wawa studies — and we’ve been seeking it for a long time.

Honestly, a professional linguist (me) finds it very unlikely that Gaelic would contribute much to the Jargon, and thence to the Native languages that took words from CW. Reasons include:

So I conclude that it’s at most an interesting coincidence that Gaelic and PNW languages share the metaphor of “blue men”.

Here is where I remind my readers that in Chinuk Wawa at least, the only definitely known occurrences of this metaphor are in the phrase łíʔil-mán / łíʔil-tílixam, literally ‘black’ man or people. That is, CW łíʔil primarily means ‘black’ but has the broader usage ‘dark’ and ‘blue’ due to Indigenous cultural influence. 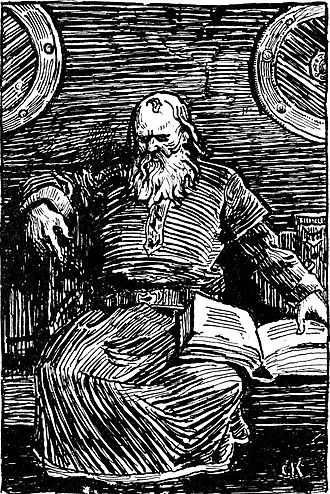 ← 1904: “In the Pathless West with Soldiers, Pioneers, Miners, and Savages”
What’s known & unknown about “Nootka Jargon”? →