“There Stands No Enemy Where We Go: Surrender of Pyongyang” by Migita Toshihide (image credit: Encyclopaedia Britannica)

Commentary on current events, in a West Coast pidgin language. 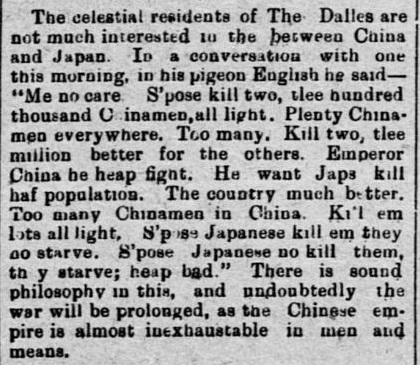 The celestial residents of The- Dalles are not much interested in the [war] between China and Japan. In a conversation with one this morning, in his pigeon English he said — “Me no care. Spose kill two, tlee hundred thousand Chinamen, all light. Plenty China men everywhere. Too many. Kill two, tlee million better for the others. Emperor China he heap fight. He want Japs kill haf population. The country much better. Too many Chinamen in China. Kill em lots all light. S’pose Japanese kill em they no starve. S’pose Japanese no kill them, they starve; heap bad.” There is sound philosophy in this, and undoubtedly the war will be prolonged, as the Chinese empire is almost inexhaustable in men and means.