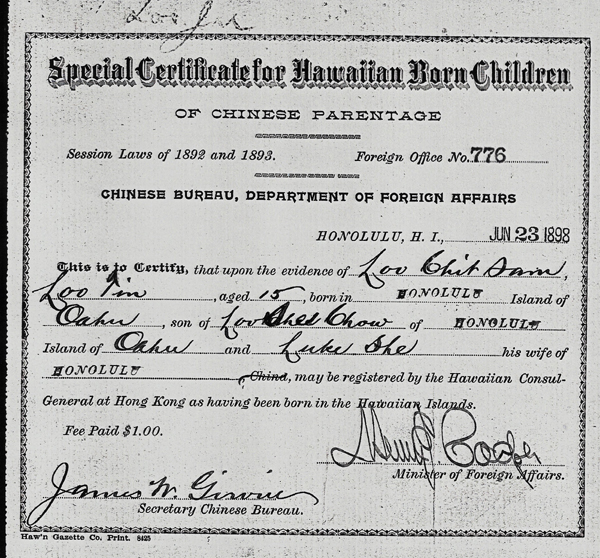 History in the making: the legality of the US’s Chinese Exclusion Act is being decided…

…and we get commentary in West Coast Chinese Pidgin English.

Under discussion here is a modified provision letting Chinese immigrants use just a photograph of themselves to officially register and get a certificate of residence under the Geary Act: 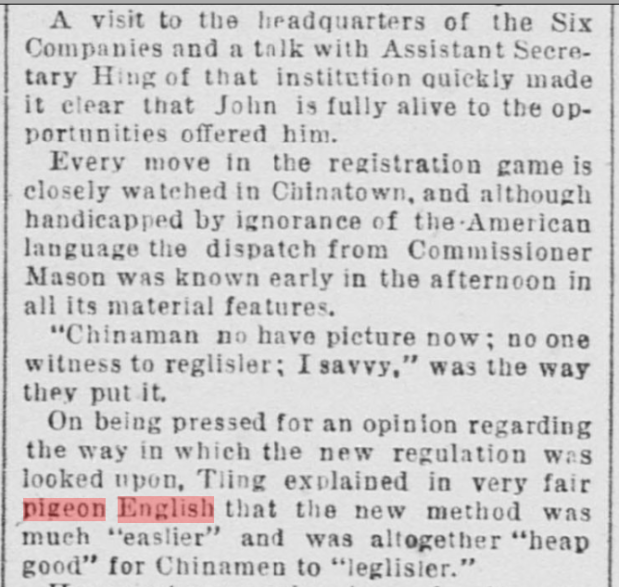 A visit to the headquarters of the Six
Companies and a talk with Assistant Secre-
tary Hing of that institution quickly made
it clear that John is fully alive to the op-
portunities offered him.

Every move In the registration game is
closely watched in Chinatown, and although
handicapped by ignorance of the American
language the dispatch from Commissioner
Mason was known early in the afternoon in
all its material features.

“Chinaman no have picture now; no one
witness to reglisler; I savvy,” [understand] was the way
they put it.

On being pressed for an opinion regarding
the way in which the new regulation wr.s
looked upon. Tling [Hing] explained in very fair
pigeon English that the new method was
much “easlier” and was altogether “heap
good” for Chinamen to “leglisler.”

I’m not sure what to make of that spelling “Tling” on the second occurrence of the speaker’s name. It’s exactly the way Whites often racially parodied Chinese immigrants’ accent in speaking English — but it’s a Chinese name, for pity’s sake!