A territorial travelogue tells us a tiny tidbit or two of the Jargon. Some is new news!

I’ve been looking through an article titled “The Mediterranean of the Pacific” by Thomas Somerville in Harper’s Magazine XLI:CCLXIV (September 1870), pages 481-498.

Whilemost of the many illustrations of Native people and local scenes may be recycled from other popular publications, the events reported are fresh.

These are all the more interesting because the author meets and socializes with such important historical persons as Judge James G. Swan and former US Secretary of State William H. Seward.

In the first part of this article, arriving by steamship from Victoria, BC at Port Townsend, Washington Territory, the visitors encounter a Klallam chief already famous from Theodore Winthrop’s bestselling book “The Canoe and the Saddle”, so the magazine writer borrows T.W.’s signature insouciant style of describing Indigenous folks:

We saw amidst the throng an old friend of theirs formerly sketched in this Magazine — the Duke of York — the chief of the Clallam Indians. The Duke appeared also to have mended his ways, and to have renounced “potlum.” [‘Being drunk’.] Not drunk, he was out with the earliest to give welcome to one of Uncle Sam’s “Tyas Tayees,” or big chiefs. Instead of having his feet dangling from under the “pississy” or blankets, he was rigged in veritable pants, and sported a Tyrolese hat with a red feather. “Halo tenas Tayee” (no small chief is he), and he lords it over his fishy vassals with despotic sway.

…their pleasures never ranging beyond the hideous “potlatch,” when, with wild screams and savage joy, the tribal crew mounted the roof of their “rancheree,” and flung their long-stored blankets to maddened “tilicums” (companions) beneath. 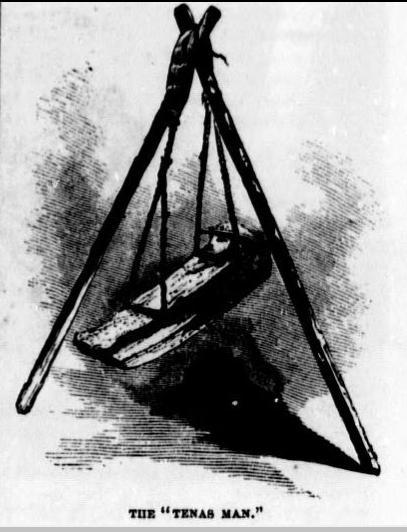 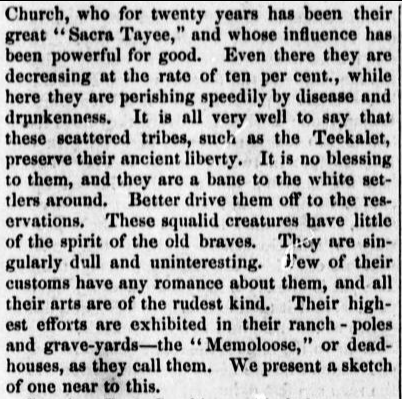 Among them there labors Father Chirouse, a missionary of the Roman Catholic Church, who for twenty years has been their great “Sacra Tayee,” [a fascinating mix(-up?) of Latin with the Jargon “sáx̣ali-táyí” (God)!] and whose influence has been powerful for good. Even there they are decreasing at the rate of ten per cent., while here they are perishing speedily by disease and drunkenness. It is all very well to say that these scattered tribes, such as the Teekalet, preserve their ancient liberty. It is no blessing to them, and they are a bane to the white settlers around. Better drive them off to the reservations. These squalid creatures have little of the spirit of the old braves. They are singularly dull and uninteresting. Few of their customs have any romance about them, and all their arts are of the rudest kind. Their highest efforts are exhibited in their ranch-poles and grave-yeards — the “Memoloose,” or dead-houses as they call them. We present a sketch of one near to this.

Here’s another interesting use of the same Jargon word:

“Ta-cōm-ah” they call it now, though, before Governor Stevens and his “Memoloose” men came along, the Indians said Tacʹo-mah.

I don’t know if this is meant as a tacit claim that < Memoloose men > was an actually used Chinuk Wawa term for the Whites — we haven’t noticed it previously in the historical record.

But it’s a perfectly grammatical CW expression, literally ‘dead people’, that matches up with a couple of known Indigenous reactions to the sudden flood of European-Americans:

(1) a perception that these newcomers were spiritual beings and/or dead folks, and

(2) worries that the vaguely-understood “reservations” mentioned in the Stevens treaties that the Indians were pressured to sign were really a “land of the dead” in the West.

I’ve also spotlighted an apparent CJ expression < memaloose house > (‘dead(-people) house’) for traditional structures built at Indigenous grave sites. That expression appears to be confirmed today by Somerville’s article, although his own translation is ‘cemetery’.

And with the above two phrases now documented, it isn’t a stretch to understand Somerville as presenting a third, conceptually associated term, < Memoloose men > as Jargon.