Here’s someone so opionionated that he argues “it could never happen”, when discussing someone’s report of it happening…

Referring to Horatio Hale’s published report on Chinuk Wawa from his 1841 visit to the Fort Vancouver area, a Norwegian gentleman argues it’s “ridiculous” to imagine all of the following:

The writer is 3 for 3 there, dead wrong. My readers know that we find examples of all three phenomena constantly. Had he paid more attention while reading Hale, he’d have noticed, at minimum, the creolization and the loaning of words into Indian languages had already happened.

For your entertainment, at least, here is what he says: 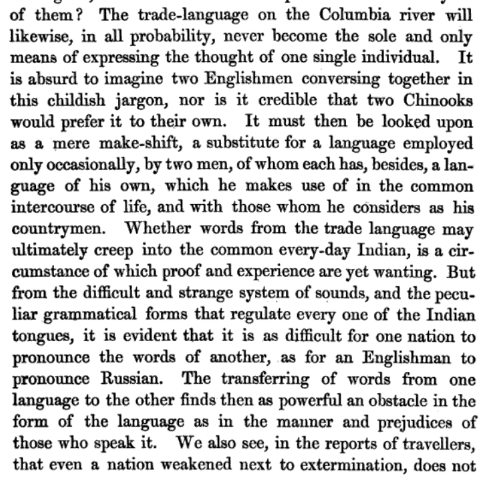 The trade-language on the Columbia river will likewise, in all probability, never become the sole and only means of expressing the thought of one single individual. It is absurd to imagine two Englishmen conversing together in this childish jargon, nor is it credible that two Chinooks would prefer it to their own. It must then be looked upon as a mere make-shift, a substitute for a language employed only occasionally, by two men, of whom each has, besides, a language of his own, which he makes use of in the common intercourse of life, and with those whom he considers as his countrymen. Whether words from the trade language may ultimately creep into the common every-day Indian, is a circumstance of which proof and experience are yet wanting. But from the difficult and strange system of sounds, and the peculiar grammatical forms that regulate every one of the Indian tongues, it is evident that it is as difficult for one nation to pronounce the words of another, as for an Englishman to pronounce Russian. The transferring of words from one language to the other finds then as powerful an obstacle in the form of the language as in the manner and prejudices of those who speak it. We also see, in the reports of travellers, that even a nation weakened next to extermination, does not corrupt its own language, but that it, in some instances, will adopt altogether that of a tribe with which this nation becomes incorporated, or by whom it is enslaved.—(Reports of Expl. and Surv. 1853–4, vol. i. pp. 411, 425.)

— from pages 263-264 of “On the Affinities between the Languages of the Northern Tribes of the Old and New Continents“, by Lewis Kr. Daa, Transactions of the Philological Society 1856, pages 251-294