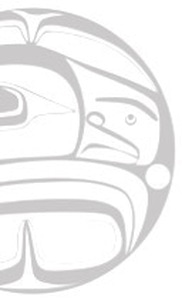 Poor translation, but by whom?

I’ve been unable to find the original newspaper article (despite the precise citation below, I could only find a different paper’s brief mention); so the possibility remains that maybe the newspaper correspondent or editor got it wrong.

But more likely, “Indian Harry” was quoted in Chinook Jargon without translation, as we’ve seen was very common practice in the first decades of Settler history in the Pacific Northwest.

So I’m betting the author of the book I found this in committed the all-too-frequent mistake of trying to translate Jargon with no prior experience. (HIRE A LINGUIST!)

Read this bit of Kitsap County history, see my further comments, and decide for yourself… 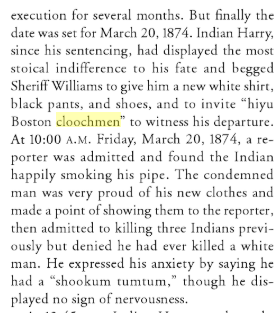 …Indian Harry, since his sentencing, had displayed the most stoical indifference to his fate and begged Sheriff Williams…to invite “hiyu Boston cloochmen” [hayú bástən-łúchmən ‘lots of White women’] to witness his departure…He expressed his anxiety by saying he had a “skookum tumtum,” [skúkum tə́mtəm ‘strong heart; firm resolve’] though [sic] he displayed no sign of nervousness…The death warrant was read and five minutes later the condemned man was moved onto the trapdoor, where he said “in the Chinook tongue,” which was translated for the whites, “I have lived a long time and traveled much, but had never realized the meaning of death until now. I think the present a proper occasion, and the time a suitable one; and I have a ‘shookum [sic] tumtum,’ but [sic] I am ready to die.”…Once his face was uncovered the prisoner said, “All tillicums [tilixam-s ‘people; friends’], goodbye,” then he turned to the sheriff and said, “All right, Mr. Williams.”

That’s all I want to say about that.

A Chinuk Wawa bonus: the same page of this book also discusses the execution of a (Walla Walla?) Indigenous man known by the Chinuk Wawa name Moos-Moos (músmus “cattle; cow”).