Alfred B. Meacham (1826-1882) was chairman of the Modoc Peace Commission who tried to help stop the Modoc Indian War in southern Oregon and northern California.

His eye for detail and his conscientious personal views make his loooong memoir, “Wigwam and War-Path: Or, The Royal Chief in Chains“, quite a rich read on regional history.

Howlish Wampo, a chief of the Cayuse tribe, in a possible local Jargon dialect feature, is quoted using íkta ‘what’ instead of qʰáta ‘how’…see below for another example:

In our next Umatilla-area excerpt, a pidgin-English word is used by the narrator, spelled syllable by syllable the way he presents Indian languages — was it used in Chinook Jargon?

The Indians teach their horses, by kindness, to be very gentle. Often on the visits which they make to old homes, a little pic-i-ni-ne (child) is securely fastened to the Indian saddle, and the horse is turned loose with the band.

An expedition against some Snake (Shoshone-Bannock) Indians, with another northeast Oregon Native man using íkta ‘what’ as a substitute for subordinating qʰáta ‘how’:

Meanwhile this wily general [Crook], divested of his official toga, was out with his [Umatilla and Warm Springs] Indian scouts, one of whom said he looked like ” ‘a-cul-tus-til-le-cum’ [kʰə́ltəs-tílixam ‘worthless person’] (a common man), but he ‘mum-ook-sul-lux-ic-ta-hi-as-tyee-si-wash’ [mamuk-sáliks íkta háyás táyí-sáwásh ‘fights what [sic] a big chief Indian [does]’] (“makes war like a big Indian chief.”)

On pages 224-225 we’re told about mixed-blood interpreter Donald McKay (1836-1899), who can speak seven Indian languages fluently. Oh my. Pages 233-234 go into details of how complicated negotiations with the Snakes are.

The opening of the Klamath tribe’s American-style court trial involves a bit of unintentional humor, due to someone’s mistranslation of the traditional English bailiff’s “Oyez, oyez“:

The wedding of Cho-kus and Sallie, both Klamaths, contains a Chinuk Wawa sentence that looks like an attempt at Grand Ronde dialect:

When the [marriage] ceremony was interpreted, he answered, “Now-wit-ka ni-hi;” [nawítka, ?nay ?hay] yes, I do.

This ni-hi looks like Grand Ronde’s short forms for the pronoun nayka and the Imperfective marker hayu-. A problem is that these never occur without a following verb. This might instead be a misprint, several of which we see among the Jargon in Meacham’s book. The mystery remains.

Next, a reference to a famous western Oregon Native game:

Finally “Scarfaced Charley” broke the silence by asking, “…You not him ty-ee [táyí ‘chief’]! He don’t know you! Hal-lu-i-me-til-li-cum [x̣lúyma tílixam ‘strange person’], — (you stranger)!…”

Next, we learn a previously unknown Chinuk Wawa term for a root-digging tool:

Having thus started negotiations, Jack proferred the use of his lodge, saying that he had not muck-a-muck [mə́kʰmək ‘food’] (meaning provision) that we could eat…He, however, ordered a camp prepared for us, which was done by making small holes in the ground, two or three feet apart, with “camas sticks,” [~(la)kamas-stík] — a sharp-pointed instrument, of either iron, bone, or hard wood, and about three feet long, with a handle at the upper end, generally in the shape of a cross, and is used very much as a gardener does a spade, by Indian women in digging roots. 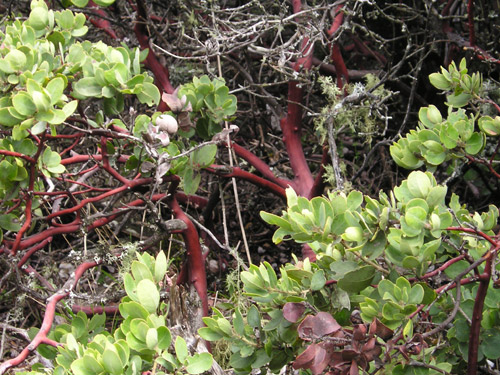 The white man sees us — (Soch-e-la Ty-ee) [sáx̣ali-táyí ‘above-chief’]. God is looking at our hearts…Long as the white rabbit shall live in the man-si-ne-ta [manzanita ‘arbutus; madrone’, from California Spanish] (groves), let it [this pine tree] stand.

The following looks like a use of a Klamath word for ‘heart’ as ‘friend(ship)’ in Jargon:

The remainder of the day was passed in exchanging friendships (ma-mak-sti-nas) [mámuk < steínash > ‘make heart’].

The dark forms of long-haired men gather in circles round the fire; for we are to have a “cultus wa-wa,” [kʰə́ltəs-wáwa, ‘just talking’] (a big free talk).

Another occurrence of something we saw above:

Two of the less widely known people involved in the events of the Modoc War seem to have Chinuk Wawa names, as do others:

My understanding about the Warm Springs Scouts who assisted the US Army in this campaign is that they would’ve been Chinookans and Sahaptins (not Paiutes because those folks hadn’t yet become part of Warm Springs). Is the following meant to be in one or both of their unrelated languages? Two words of it are known in Jargon. The word < shiks(h)t(e)wa > is explicitly identified as “Yakama” Chinuk Wawa by Father St. Onge in his 1892 manuscript dictionary; we find it in Beavert and Hargus’ Sahaptin dictionary as síkstwa ‘group of friends’.

These boys are Warm Springs Indians…

Well, there’s a nice bit of authentic Chinook Jargon for you from people who knew it well and used it constantly in their work.

← Everything west of the Rockies is the Coast
Earliest female Chinuk Wawa speech? Pre-Grand Ronde →

One thought on “Cayuses, scouts, friends: more from Meacham”