Secretary of the Navy gets an Indian name

The ubiquitous Tillikums of Elttaes again! I might have known!

Here they give a name in not-very-good Chinook Jargon to the US Secretary of the Navy. 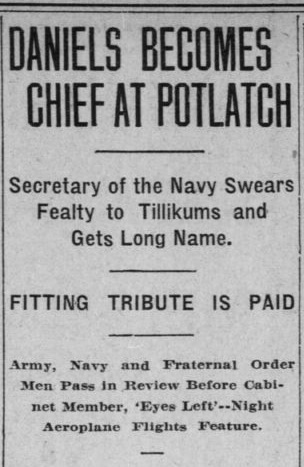 Secretary of the Navy Swears Fealty to Tillikums and Gets Long Name. 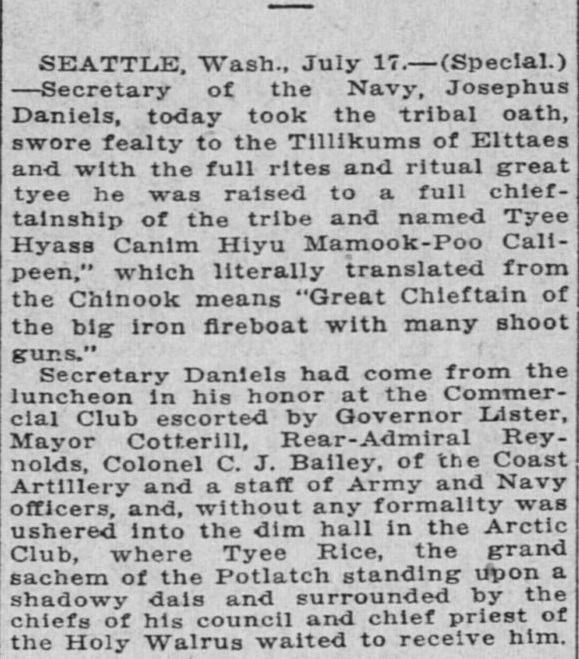 SEATTLE, Wash., July 17. (Special.) — Secretary of the Navy, Josephus Daniels, today took the tribal oath, swore fealty to the Tillikums [‘people’ or, as a loan into English, ‘friends’] of Elttaes and, with the full rites and ritual great tyee [‘chief’; does this make sense?] he was raised to a full chieftainship of the tribe and named [“]Tyee Hyass Canim Hiyu Mamook-Poo Calipeen,” which literally translated from the Chinook means “Great Chieftain of the big iron flreboat with many shoot guns.”

[DDR: more like ‘Chief Big Canoe In the Act Of Shooting a Rifle’. Hyass canim is self-consciously antiquated Jargon for ‘ship’, whereas ship or bot would be the usual word. Hiyu plus a verb = progressive action. Calipeen is definitely not a naval big gun.]

Secretary Daniels had come from the luncheon in his honor at the Commercial Club escorted by Governor Lister, Mayor Cotterill, Rear-Admiral Reynolds, Colonel C. J. Bailey, of the Coast Artillery and a staff of Army and Navy officers, and, without any formality was ushered into the dim hall in the Arctic Club, where Tyee Rice, the grand sachem of the Potlatch standing upon a shadowy dais and surrounded by the chiefs of his council and chief priest of the Holy Walrus waited to receive him.

Secretary Daniels knelt before the throne, his right hand upon the smooth skull of the sacred walrus and his knees touching its great tusks. the tyees of the council held their tribal totems, war bows and spears above his head, while Tyee Rice uttered the fateful words of the Chinook accolade.

The consecrated fire was then llghted in the hollow eye socket of the holy walrus and Josephus Daniels, tyee of the Potlatch, with the printer-tormenting name quoted above, rose to his place among the chiefs and smoked the pipe of peace. In a short speech he urged the business men of the entire country to take an interest in politics and help give the people a clean and efficient government.

Paying a fitting tribute to secretary of the Navy Josephus Daniels, more than 2000 men in marching platoons, Army, Navy and fraternal orders, passed the Potlatch reviewing stand this afternoon in the dress uniforms of peace and war with “eyes left,” while the Cabinet visitor looked on, an interested spectator.

The afternoon parade was made up of two divisions, the first consisting of the naval force of Puget Sound and complements from visiting warships, the military forces from North Pacific posts and the state militia, the second fraternal organizations in uniform and the floats of their societies. The procession, two miles long, was very properly headed by Army and Navy detachments, in honor of the distinguished member of the National Cabinet.

Thousands upon thousands of persons jammed the down-town streets tonight enjoying the band concert at Pioneer Place, the children’s potlatch dance at the grandstand, the reception at the Arctic Club, illuminated night aeroplane flight along the water front and the spectacular Japanese fireworks at the grandstand.

Two successful aeroplane flights over Elliott Bay and the city were features of this morning’s programme of the Potlatch. Aviatrice Miss Alys McKey made the first flight at 10 o’clock, lasting 20 minutes, and Takasa, the Japanese aviator, made a flight at 10:30, lasting 15 minutes.

The steamship Senator arrived from Nome, Alaska, today with $700,000 of gold bullion, a very appropriate incident in the Potlatch, which is held every year to commemorate the arrival of the first Klondike gold ship in 1897, also with 700,000 In gold dust,