Here’s where it pays to be that weird picayune breed that I belong to, the reader of dictionaries. 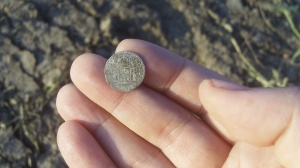 In the 1994 dictionary of Lushootseed (Puget Sound Salish) by Dawn Bates, Thom Hess and Vi taqʷšəblu Hilbert, you can find the usual money words borrowed from English — probably via the pidgin Chinook Jargon — such as:

By the way, the “dollar” word has the /t/ sound we expect when an English /d/ gets borrowed into a Pacific Northwest language. Pretty universally you’ll find this de-voiced /d/, as something like tala in all the Salish languages I can think of at the moment.

So why the /b/ in “10 cents”? We’d expect a devoiced /pit/ here, by the logic I just used…but at the time when Chinook Jargon and English were spreading along the PNW Coast in the 1800s, many many Native languages had a kind of free variation where /m/ sounds often came out sounding a lot like [b]. George Gibbs’ 1863 Vocabulary of the Chinook[an] Language is an example that has lots of “b” where we know an “m” was intended. Likewise, in much of the Coast the English/CJ word “bit” (as in “two bits” etc.) was understood by Native ears as intended to sound like “mit”. The Lushootseed borrowing of this, therefore, went on to take part in that language’s 1800s sound shift of nasals into oral stops — in other words, to sounding like the speakers had head colds. So m’s became b’s, and n’s became d’s. The original borrowed form “mit”, in this way, became “bit”, only by coincidence resembling the original English word!

This second fact that I’ve just told you sets the stage for an additional money word that I just noticed in Lushootseed:

In a decade of reading this dictionary, this word never looked odd to me for a minute. Today I see it with other eyes, somehow. Could this be made of two parts, the native Salish noun-making prefix s- + a borrowed English “picayune”?

This idea seemed too weird to be true. So naturally, over to Google Books for a look at 19th-century use of “picayune”.

Boom! Direct hit. A periodical titled “The Numismatist” XIII:5, May 1900, has an article on “Colloquial Names of Coins” centering on this word, where page 135 says the old half-dime coin was called a “picayune” in Illinois, ascribed to Missouri French influence.  This seems to have been in the 1840s or 1850s.

Richard Smith Elliott’s 1883 memoir “Notes Taken in Sixty Years” backs this up with more information: “in New Orleans and the West” the so-called five-penny (“fipenny”) bit (actually a 6 1/4 cent coin, i.e. 1/16 of a dollar) “was a ‘picayune'” — he says this is the basis of the name of the New Orleans newspaper (page 88).  (For my non-American readers: “picayune” now primarily is an adjective, meaning “of little value, trifling”.) 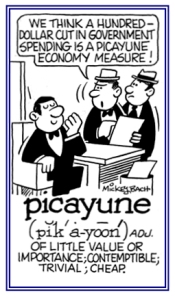 The earliest published book that I find to use this term yet is from 1869, but as noted, “picayune” was in circulation in the earlier decades when Native-White contact was at arguably its most intense.

Following the same logic that’s been applied in other studies of PNW language contact, when we find an obviously old loan of an English word into an Aboriginal language of this region, we can infer that it came in via Chinook Jargon.  You know, the “trade language”.  Trade involves money a lot of time, now doesn’t it?  So I’m wondering if this Lushootseed word for “a nickel” coin is actually a newly discovered CJ word.  (It’s certainly not in any of the CJ literature yet.)

6 thoughts on “Lushootseed “5 cents” from US dialect English “picayune””