Gentrifying a Siwash neighborhood in Olympia: The history of a word in local English

The Vancouver (Washington Territory) Independent of April 8, 1876, at the end of its “Olympia Notes” column, reproduces news from the Olympia Echo.  The piece includes the following sentence of note:

Little shanties which have been in service there by Siwashes, and which have been dirty landmarks on the west shore of the bay for past years, now tumble down before the direct results of our last special tax.

This is among the earlier uses of “Siwash” in local English that I can find.  Supposedly it goes back to 1855 (look for my ALL CAPS note below).

As messy as it look onscreen here, I’m reproducing below a Google search I did specifically on this plural form of the word.  Interesting what it turned up: “Siwash” is a synonym for Chinook Jargon?! It also means “stingy” in someone’s local English? There was a minor-league baseball team named the Seattle Siwashes? 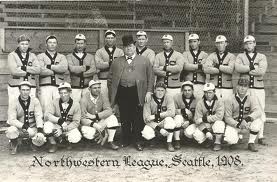 ← Mencken on Chinook Jargon’s influence
Wah-Kee-Nah and her people, including James Clark Strong →