Shortly after living on Shoalwater Bay, Washington Territory, where he wrote his famous memoir / document of Chinook Jargon…

James G. Swan lived, worked, and again spoke Chinuk Wawa daily on the north side of the Olympic Peninsula, and kept a diary.

Today I’m looking through a typescript of Swan’s handwritten 1859-1863 diary; many spots omit details, just stating “list of Indian names”, which potentially will yield Chinuk Wawa material as well, once the original document is examined.

Here are a number of excellent bits taken from Swan’s diary, some of which may be new discoveries in Jargon studies:

Sep. 17 – “…the Clalams reported that the Bostons [bástən ‘American Whites’] were going to send the Makahs all away to the north”. This can be connected with what we’ve documented of the Pacific NW Indigenous rumor that the newly signed treaties doomed Indians to being shipped off to the land of the dead. (See “Polaklie Illahie“.)

Sep. 18 – “Colchote told me that Elwha Indians were silex [sáliks ‘angry’] with him and want to kill him”

Nov. 7 – “He also drew on the first page of this book one of the skookums [skukúm ‘supernatural beings’] who cause the lightning by running out its tongue.”

Nov. 8 – “He wants me to paint a tamanawas [t’əmánewas ‘spirit power’] board for him.” I’m suspecting there was a Salish Sea-region expression in Chinook Jargon, t’əmánewas-laplásh ‘spirit power board’, for this traditional cultural object. Compare “sqʷədilič boards” in the local English of Lushootseed Salish people.

Nov. 13 – “Cowbetsi said that that [sic?] a watchman came down from Elwha last night…” Possibly a Jargon word; known as such in many other localities, especially in this ‘northern’ dialect of CW. 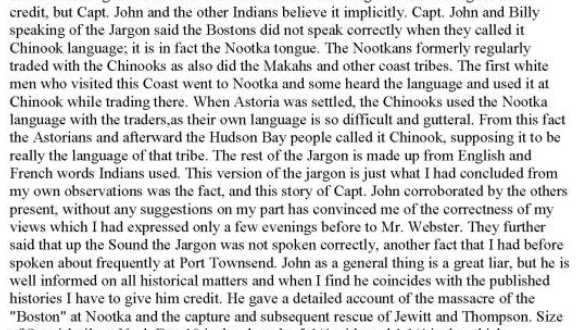 Capt. John and Billy speaking of the Jargon said the Bostons did not speak correctly when they called it Chinook language; it is in fact the Nootka tongue. The Nootkans formerly regularly traded with the Chinooks as also did the Makahs and other coast tribes. The first white men who visited this Coast went to Nootka and some heard the language and used it at Chinook while trading there. When Astoria was settled, the Chinooks used the Nootka language with the traders, as their own language is so difficult and gutteral [sic]. From this fact the Astorians and afterward the Hudson Bay people called it Chinook, supposing it to be really the language of that tribe. The rest of the Jargon is made up from English and French words Indians used. This version of the jargon is just what I had concluded from my own observations was the fact, and this story of Capt. John corroborated by the others presents, without any suggestions on my part convinced me of the correctness of my views which I had expressed only a few evenings before to Mr. Webster. They further said that up the Sound the Jargon was not spoken correctly, another fact that I had before spoken about frequently at Port Townsend. John as a general thing is a great liar, but he is well informed on all historical matters and when I find he coincides with the published histories I have to give him credit. He gave a detailed account of the massacre of the “Boston” at Nootka and the capture and subsequent rescue of Jewitt and Thompson. 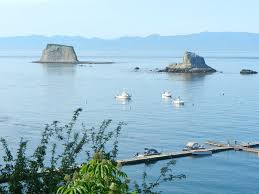 Dec. 6 – the traditional story of 3 big stones at Clallam Bay: “They think the Elip [Iləp Tílixam ‘the first people’] were working Tomanawas [mámuk t’əmánəwas]– then walked into the water and were stones.”

Aug. 17 – “…made sketch of large Tomanawas Lodge” — is t’əmánəwas-háws a historical phrase in Jargon?

Sep. 3 – “Mr. Hoff was stabbed in the back last night at the Indian camp by a Clallam named Chips a Port Discovery Indian[;] cause[,] clonas whiskey.” [t’łúnas (x)wíski ‘maybe alcohol’.]

Oct. 10 – “James A. Polk one of the Clallam chiefs … He said that it wont be calm tomorrow for the stars did not tumble, that when the stars overhead twinkle there wont be hiyu wind [háyú wín ‘lots of wind’] but the stars were calm and no sign of wind.”

Nov. 21 – [The dot-dot-dot ellipses here are those of the diary transcriber; discussing a S’Klallam sub-chief:] “Gen. Scott … tomanawas an emetic … better.”

Jan. 25 – “Gerrish woke up from a dream this morning and called out to Skip that there was a wolf in the chicken house. Skip and I turned out but ‘halo‘ [hílu ‘no(ne)’] wolf…”

Feb. 15 – [referring to a major S’Klallam leader:] “The Duke of York told me today that the various tomanawas meetings held by the Indians were as follows” [a list of 6 such observances in the Salish Sea area in the preceding 8 months is given].

Mar. 4 – Bitterly ironic word choices: “A squaw, formerly a slave of the Duke of York and lately the squaw of Jim Frazier died a few days ago and her father came down from Chemakum last night and fired a charge of shot into an old doctor [dákta ‘doctor; medicine man’] of the tribe as payment of his charge for mamokin Tomanawas.” [mámuk t’əmánəwas]

Mar. 10 – “Jimmy had the night mare [sic] last night and made a great howling. This morning he told me that the memeloose [míməlus(t) ‘dead people’] were after him and made him crazy. I told him this memloose was dead squid which he ate for supper very heartily and they disturbed him.”

Mar. 12 – “Charley always has threatened Swell, but Swell thought it all cultus wawa and did not feel afraid…” [kʰə́ltəs wáwa ‘worthless talk’]

Mar. 15 – “The Indian who was in the canoe with Tallacout – George tuch ton, a Clallam living at Dungeness near Lord Jim – his Boston name is Charley.” [bástən-ním ‘White people name’]

Mar. 17 – “The Indians were all about moving to their ‘warm houses‘.” [A regional CW expression? wám-háws ‘summer dwelling’.]

Mar. 21 – A discussion of buying a wife, the traditional Native protocol.

Mar. 27 – “John told me that the man who died yesterday in Colchote’s was eating roots, when looking up he saw a ghost who turned his mouth one side…” Compare this with the recurring theme in Grand Ronde Chinuk Wawa of people getting afflicted with powerful supernatural forces that mamuk-q’áyʔwa labúsh (make the mouth go crooked).

July 8 – “I gave Kle klese mah a ‘paper‘ [pípa ‘writing’] stating his name.” This common Pacific Northwest expression is used in many subsequent entries, such as Jan. 13 ref. governor Isaac I. Stevens.

Dec. 5 – “They say that the eclipse is occassioned [sic?] by fish like the cultus cod or tooshcow…” Cultus cod is an old PNW English common name for the species. Was it called the same in Jargon?

Dec. 30 – Referring to someone named Hitchcock: “He is about the most perfectly cultus man I ever met with.” [kʰə́ltəs mán ‘no-good man’.]

Jan. 16 – A criticism of the USA’s failure to hold up its treaty promises, uncharacteristically met with sarcasm by Swan: “He [Colchote] complained that there was no doctor here and said that Washington had promised the Indians here they should have a good doctor and that Washington would be ‘hias shame‘ [háyás(h) shím ‘much ashamed’] if he knew what a cultus doctor [kʰə́ltəs dákta ‘no-good doctor’] Mr. Webster had brought. I told Colchote that he did not need any medicine, for he employed Indian doctors instead of leaving his case entirely in the hands of the Boston doctor.” Notice that Colchote refers to the US government as a personified “Washington”, an idea that we see traces of in various PNW languages, and surely a linguistic archaeological relic of the White treaty makers’ constant references to “the great father in Washington” (DC).

← ‘Angry’ because of White people?
Chinuk Wawa in a Stó:lō hymn book (Part 11: The Lord’s Prayer) →