1870 BC humour: Pardon my Chinook, but I have legislative aspirations

…And he justifies the informal lingo by saying he wants to be a politician.

You can read his entire published letter here. I’ll pull out the relevant passage in the highlight below. 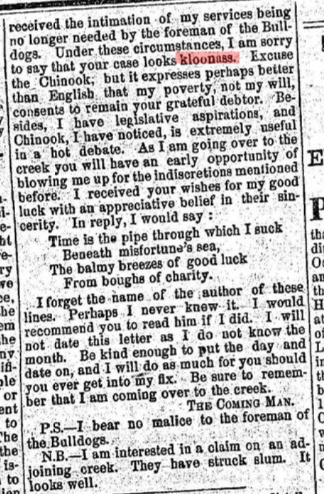 …Under these circumstances, I am sorry to say that your case looks kloonass. Excuse the Chinook, but it expresses perhaps better than English that my poverty, not my will, consents to remain your grateful debtor. Besides, I have legislative aspirations, and Chinook, I have noticed, is extremely useful in a hot debate.

I should point out that unlike the above ironic case, < kloonass > is never an adjective, when used in the Jargon.

Within Chinuk Wawa, this word (t’łúnás) is instead a discourse marker, a means of conveying a speaker’s stance toward what’s being said.

So in today’s letter, part of the humour, for anyone who understood the word in the first place, was this word’s being used in a novel way.

I’d love to figure out who the letter writer was, and whether he brought more Chinuk Wawa into the BC Legislative Assembly.

That would make a nice first chapter in the history of Chinook Jargon as a BC official language!

What do you think?
Kahta mika tumtum?

2 thoughts on “1870 BC humour: Pardon my Chinook, but I have legislative aspirations”