Not too far into the post-frontier period, Chinuk Wawa was already a curiosity just outside Grand Ronde…

It’s not evident who the Native man involved was; “Chief” was not necessarily intended as an accurate label for an individual. 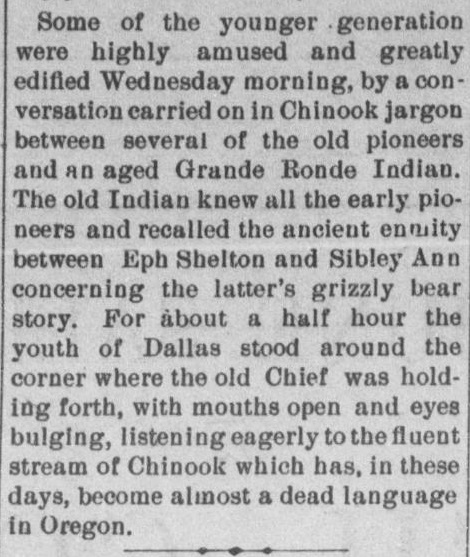 Some of the younger generation were highly amused and greatly edified Wednesday morning, by a conversation carried on in Chinook jargon between several of the old pioneers and an aged Grande Ronde Indian. The old Indian knew all the early pioneers and recalled the ancient enmity between Eph Shelton and Sibley Ann concerning the latter’s grizzly bear story. For about a half hour the youth of Dallas stood around the corner where the old Chief was holding forth, with mouths open and eyes bulging, listening eagerly to the fluent stream of Chinook which has, in these days, become almost a dead language in Oregon.

There were plenty of Sheltons and Sibleys in the area, but I haven’t managed to track down the people or the anecdote being referred to…

Kata maika tomtom? What do you think?