Stó:lō is a Chinuk Wawa name

The name Stó:lō for the lower Fraser River Salish people of British Columbia is quite possibly a Chinook Jargon word.

This idea hasn’t been floated before, so let’s look under the surface.

We know that Stó:lō /stá:ləw/ is the word for ‘river’ in these people’s language, which is also sometimes called Stó:lō, or else Halq’eméylem.

And due to the role of Oblate Catholic priests in making Chinuk Wawa widely used in BC, starting from the general lower Fraser area, stalo became a common word for ‘river’ in the province’s Jargon.

We see stalo frequently in the Kamloops region, once the “Chinook Writing” alphabet caught on in 1891. Here’s one of the earliest examples:

I noticed Wikipedia making the same connection, from a different angle:

The first historically documented reference to these people as “the Sto:lo” occurs in Catholic Oblate missionary records from the 1880s. Prior to this, references were primarily to individual tribal groups such as Matsqui, Ts’elxweyeqw, or Sumas.

— from the Wikipedia article “Stó:lō”

I find just a few uses of the name for several decades afterward, for example in scare quotes as ‘Stalo’ Indians in a 1900 publication, and in a spelling ‘Stallo’ by the people themselves in a 1930s plaque: 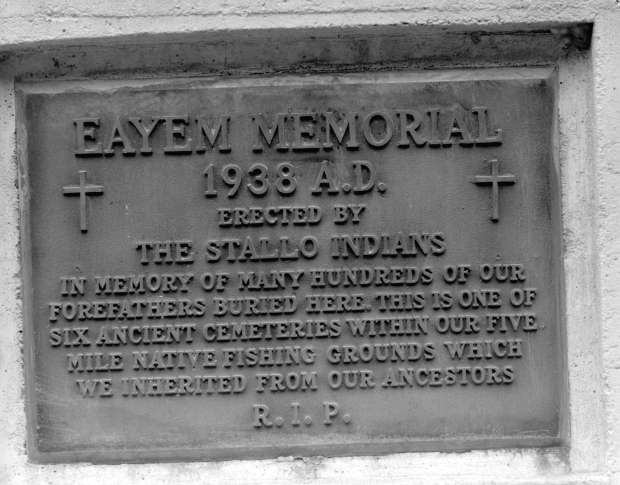 The Handbook of North American Indians hints at the rest of the story of how this word caught on as a standardized name for these tribes:

Stalo, from stá·ləw (Upriver [dialect]) or stál̓əw̓ (Downriver and Island) ‘river’, was adopted by [anthropologist Wilson] Duff (1952a:11 [The Upper Stalo Indians of the Fraser Valley, British Columbia]) for the people of Fraser Valley. The name appears as Stó:lō in the orthography used in the Chilliwack area beginning in the 1970s.

But as I say, the previously unremarked link from the people’s own language to their being recognized by one of its words seems likely to be Chinook Jargon.

← Are Chinuk Wawa’s prepositions due to Salish & not Chinookan????
Alsea ‘knife’, ‘metal’, and missing links →

2 thoughts on “Stó:lō is a Chinuk Wawa name”