With today’s Chinook Jargon song “Lilly Dale”, I’m getting around to writing what I thought was just another doggerel bit, but turns out to be tangled in a heck of a web of intrigues. Before I dive into it, let me point the interested to sheet music for the tune.

This version of an already popular lyric of HS Thompson‘s is, by all appearances, to be scored to the credit of Oregon. It’s one of the earliest CJ songs, with its first appearance known to me being in the Oregon Argus of February 23, 1861, page 4, column 1, as you see it here (I’ll wait to translate below, where the lyrics are more readable):

Typically for that era, when a newspaper’s “exchanges” provided its editor with no end of material to fill columns on slack news days, it’s soon found in the Marysville (CA) Daily Appeal, June 26, 1862, page 4, column 1, where it’s said to be copied from the Portland (OR) Times.  The Jargon “Lilly Dale” was still sufficiently popular to justify reprinting in 1899 with minor spelling changes, as shown next: 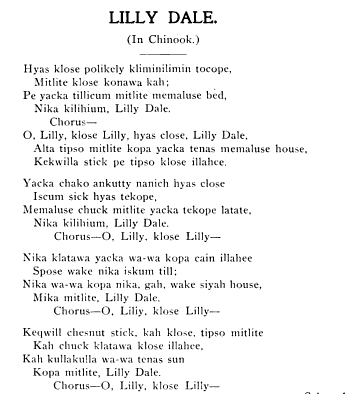 Nika klatawa yacka wa-wa kopa cain illahee
“I’m going,” she said, “to the land of Cain”
Spose wake nika iskum till;
If I don’t get [too] tired;
Nika wa-wa kopa nika, gah, wake siyah house,
I’ll tell you where, near the house,
Mika mitlite. Lilly Dale.
I will stay, (I,) Lilly Dale.

(Note that the “land of Cain“, east of Eden, is the “land of Nod” — as when English speakers talk of “nodding off”.)

The Chinook version doesn’t really rhyme, which you often see when a song or poem has been translated from English. And in many ways (e.g. “nanich hyas close” is a stretch for “looking very good (beautiful)” because it’d normally be taken as “looking (around) very well”!), it’s highly dependent on the original English text. I mean that you’d have to know the English to fully make sense of the translation, which isn’t totally clear on its own: 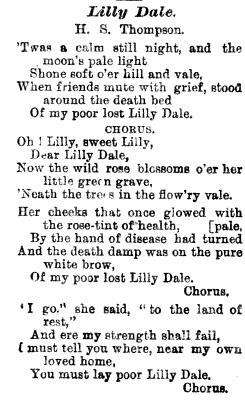 We can step a little farther along our investigative trail and say that the Chinook translation, despite sticking very closely to the English, was probably made from a version of the original that was learned orally, rather than from the official written lyrics.  Clues to this include the first line of the first stanza, “Hyas klose polikely klimin[k]limin tocope“, where instead of the expected “moon’s pale light”, the underlined bits mean “powdery white”! I’ve not been able to find documentation of such a variant wording in English, but it sure is mighty plausible since it still rhymes. Also we find “pe” in the last line of the chorus — “Kekwilla stick pe tipso close illahee” The original is “‘Neath the trees in the flowery vale”, but the Jargon has it as “Beneath the trees and the grassy/flowery vale”, a typical mondegreen (misheard lyric) or eggcorn (misunderstood word) for native speakers of English.  We also come up against overly-literal, graceless translation equivalents such as “Memaluse chuck” (“death-water”) for the original “death-damp” (which means something more like a cold sweat).

By the same token, the Jargon here sounds like the real McCoy, learned from hearing it used.  A big reason why I claim this can be seen where I’ve marked [NULL] above, reflecting places where a native English speaker would typically use the generic preposition kopa/copa, but where it’s even more idiomatic in CJ to leave it out.  In fact, one more preposition was left out in the later than in the earlier publication of the Jargon text!  Here’s another possible indicator of “genuine” Jargon: the final line of the final stanza has “Kopa mitlite Lilly Dale” for “There lies Lilly Dale”.  This is the kopa with final stress that means “over there”, still found in the 2012 Grand Ronde dictionary as kʰapá.

(Those readers who are relatively experienced with CJ, don’t be thrown off by the occasional “mika/nika” (“you/I”) confusion — we see it all the time in print, and it’s almost always clearly the typesetters’ fault.)

What’s not a mystery in all this is whether Max Irwin, a.k.a. P[aul] Maxey, created this particular version of the song, for which he was known here on the edge of the continent. Knowing that the tune enjoyed previous popularity, we can infer that someone besides him put it into Chinook Jargon.  This is because Mr Irwin hadn’t been in the West long enough to have learned straight Jargon and do the translating himself.

Instead, the first mystery around Max is his wife’s identity; she may have had more aliases than her husband. We know that he married 14-year-old Louisianan, Augusta “Gussie” Lamareux/Lamoreux in 1859, and they rode out the Civil War in California 1861-1865. There, he could’ve acquired some Jargon repertoire even if he didn’t originate it. And there, I think the couple must’ve divorced, as Gussie went on to a career on the East Coast. Max, at least, went straight into California show business on arrival, making his first appearance in an advertised Gilbert’s Melodeon billing as “The favorite Ethiopian comedian” together with “Miss Joey La Forrest [his wife’s stage name?] the beautiful and accomplished commedienne, danseuse and vocalist”…”[h]aving just arrived from New York”, in the San Francisco Daily Alta California of August 18, 1861, page 4, column 3.  We can further infer that Max rapidly ingratiated himself to Pacific Northwesterners, as we can also find a regional-reference-laden piece of his titled “A Trip to Salmon” set to the tune of “Jordan” in the Los Angeles Star (reprinted from the Portland Times) of May 17, 1862, page 3(?), column 1. At any rate, the puzzle of Max’s wife’s identity reasserts itself in the Daily Alta California of April 6, 1864, page 1, column 2, where in the Fourth District Court a surprisingly monikered “Susanna Irwin” is suing the minstrel-show man Max for divorce, with testimonials running to mutual accusations of adultery and desertion.  This was a woman of many guises.

The second mystery of Max is his race.  You might think that an “Ethiopian” like Mr Irwin was an African-American performer who had luckily escape to a free state for the duration of the war. But the Morning Oregonian of February 24, 1862, quoted in 1912, lauds “this fine Negro delin[e]ator” — a phrase that I’ve found elsewhere looking as if it means “imitator”. A criticism in the Los Angeles Star of March 8, 1862, page 2, columns 2-3 under the headline “Abolitionism — What It Is in Practice” puts us wise.  There, a letter from “Colored Man” to the editor of the Victoria (BC) Colonist is reprinted, in which the writer, an African-American who has chosen to become a British subject, is outraged at an “Ethiopian” i.e. blackface peformance by sailors of HMS Topaze: “It is nothing more nor less than a repetition of the disgusting negro performances of such low scum as Mike Mitchell [who was called “the champion Jig dancer” in Oregon in 1858, and found frozen to death in Portland in 1862], Max Irwin, and their like”.  Evidently, then, Mr Irwin worked in blackface.

The third mystery of Max Irwin is where he died. Some sources have him emigrating to Australia circa 1862 (remember, gold rushes also attracted providers of entertainment, and not just the female kind) and dying in Adelaide at age 33 in 1864. (CITES). Others say Max Irwin “of San Francisco” was supposed among the victims in a terrible rail accident in California on November 14 of 1869. This final question is one that I don’t feel I’ve resolved to my own satisfaction.

What I do know is that with today’s topic I’ve stumbled into a really interesting historical research project that imparts plenty of new color to the genre of “Chinook Jargon songs” that I’ve often written about.