I’m inferring that someone got on this Nanaimo newspaper reporter’s case about his poor command of Chinook Jargon.

Look at the timing of this pair of articles.

And maybe think about whether you’d get on this guy’s case about racial assumptions involving Indigenous people and alchohol. 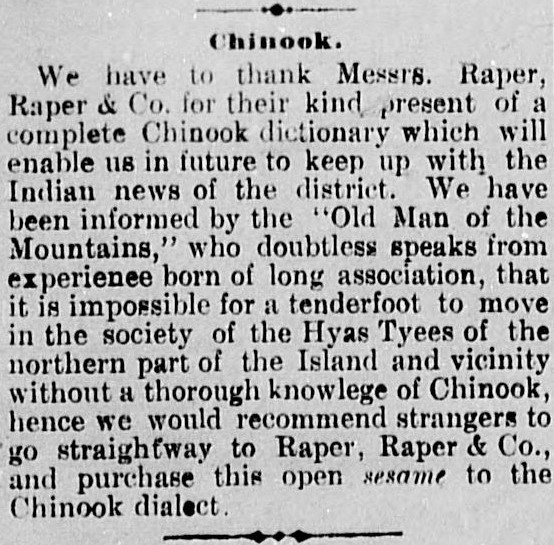 We have to thank Messrs. Raper,
Raper & Co. for their kind present of a
complete Chinook dictionary which will
enable us in future to keep up with the
Indian news of the district. We have
been informed by the “Old Man of the
Mountains,” who doubtless speaks from
experience born of long association, that
it is impossible for a tenderfoot to move
in the society of the Hyas Tyees[great chiefs] of the
northern part of the [Vancouver] Island and vicinity [i.e. Kwakwaka’wakw / ‘Kwakiutl’ people]
without a thorough knowlege [sic] of Chinook,
hence we would recommend strangers to
go straightway to Raper, Raper & Co.,
and purchase this open sesame to the
Chinook dialect.

Upset in the Gulf

A Canoe Load of Siwashes Nearly
Find a Watery Grave.

Yesterday a canoe load of Siwashes,
three men and two klootchmen, landed at
a point below Departure Bay, having
passed through a very rough experience.
It seems these Indians had left Alert Bay,
or some more northern cannery station,
with the intention of coming to Nanaimo
to spend what money they had earned
during the fishing season, and while
passing down the coast with all sail set,
were struck by a sudden squall that car-
ried away masts and sails, throwing the
canoe over onto her side and precipitat-
ing the occupants and baggage into the
water. At the time of the accident they
were about a mile from shore and things
looked desperate, as after several ineffec-
tual attempts to cut away the masts and
sails, one of the klootchmen began to
show signs of sinking but was finally
placed in safety on the bottom of the
canoe. After drifting for about four hours
the canoe neared land and the Siwashes
swam in towards it, pushing the craft,
and finally landed in safety, minus every-
thing, tiller, ammunition and provisions.

Near where they landed there was,
luckily, a bush fire, at which they
managed to dry themselves and then,
having fixed up the canoe as well as pos-
sible, renewed their journey down the
Gulf, landing at Cape Mudge about a
week ago, after which they started for
here. The Siwash interviewed on the
subject, with the aid of Mr. Raper’s
Chinook dictionary, was very reticent
about the affair, and persisted in remark-
ing that there was no whiskey aboard at
tbe time of the accident, which, on the
principle of qui s’excuse s’accuse tells its
own tale.

On a lighter note, I have pointed out to my young children that qui s’excuse, s’accuse  is French for “he who smelt it, dealt it.” 🙂

This “Old Man of the Mountains” was the [libel-avoiding] pseudonym of someone referred to in a slightly earlier opinion piece using, and signed with, some Jargon [itself a libel-avoidance tool, as I’ve written in the last week]: 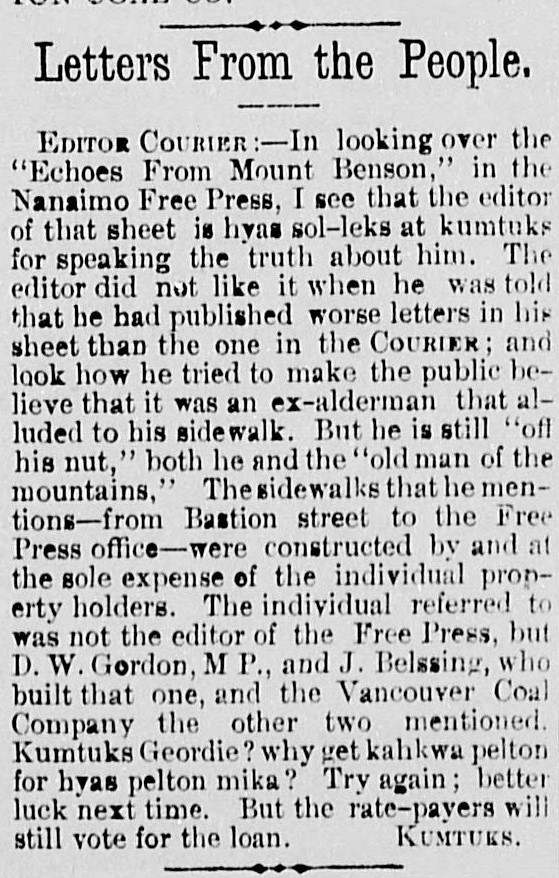 Letters From the People.

Editor Courier — In looking over the
“Echoes From Mount Benson,” in the
Nanaimo Free Press, I see that the editor
of that sheet is hyas sol-leks  [very angry] at [K]umtuks [“Understanding”]
for speaking tlie truth about him. The
editor did not like it when he was told
that he had published worse letters in his
sheet than the one in the COURIER; and
look how he tried to make the public be-
lieve that it was an ex-alderman that al-
luded to his sidewalk. But he is still “off
his nut,” both he and the “old man of the
mountains.” The sidewalks that he men-
tions—from Bastion street to the Free
Press office—were constructed by and at
the sole expense of the individual prop-
erty holders. Tbe individual referred to
was not the editor of the Free Press, but
D.W. Gordon, M P., and J. Belssing [sic], who
built that one, and the Vancouver Coal
Company the other two mentioned.
Kumtuks [Do you understand,] Geordie [George Norris]? Why get kahkwa pelton [practically crazy,]
for [because/since] hyas pelton mika [you’re really crazy]? Try again; better
luck next time. But the rate-payers will
still vote for the loan. KUMTUKS.

I’m thinking the editor of the Free Press is George Jr., and the Old Man of the Mountains who is so closely associated with him is George Norris Sr.  Do you suppose that’s a good guess?