The hoary anecdote of the Spotted Tails

Newspapers have a custom of printing stories from sources far away.

In the 21st century, that’s because they get so much from online sources.  In the 20th, it was wire services like AP and UPI.

In the 19th century, the source–and reason–was “exchanges“.  Newspapers sent copies of their own issues to other newspapers, swapping in order to get access to more information about the big world.

By the way, the Chinook Jargon newspaper Kamloops Wawa had quite a number of exchange relationships while it existed.  And this led to plenty of good, free publicity for KW.

One byproduct of the “exchange” system is that we can often find one and the same story repeated far and wide if it tickled the fancy of enough editors.  One such is the hoary anecdote of the Spotted Tails: 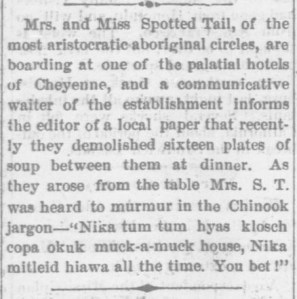 Now, this personal name sounds mighty Plains Indian to me.  Spotted Tail is the usual English translation of a name held by the Lakota warrior Siŋté Glešká.  I hold the utmost skepticism that these folks actually knew any CJ, as I’ve found no evidence of its currency–and some testimony explicitly against such–beyond the Rocky Mountains. 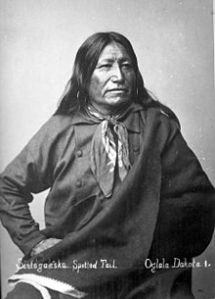 But keep in mind that these “local color” or more accurately “ethnic color” squibs were a staple of late-1800s journalism.  I know of at least three separate stereotyping stories like this about Chinese immigrants that were republished very widely, for example.

And Chinook Jargon was a token of vague Indianness and frontier authenticity, in the eyes of whites.  Which made it a natural for consumption in regions outside the Pacific Northwest.

Need proof that this snippet of CJ was never intended to be understood by readers?  It’s not particularly funny.  (POST YOUR TRANSLATION OF IT IN THE COMMENTS.)

The article is equally funny, or funnier, if the reader seeing the exotic CJ words “hears” “typical” “Indian” “gibberish”–punctuated with an earthy English “You bet!”

← Soapology and washology velly chep
Pigeon Indian, or, how to talk to the Chinese →

One thought on “The hoary anecdote of the Spotted Tails”