1858: Confirmed BC Métis French in the Cariboo

A remembered secondhand recollection of the Cariboo gold rush, from a man who became a Settler, confirms the presence of BC Métis French by a different name. 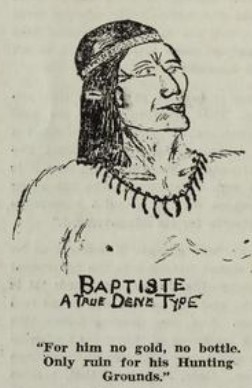 Importantly, this memoir tells mainly of BC Indigenous people who spoke “the Hudson Bay French patois”.

That point backs up what I’ve long told you, that BC MFr — and possibly some Michif (which had no name yet) — was the first lingua franca of the province, before Chinook Jargon took over in gold-rush times.

Today’s lucky strike is in “Chronicles of the Cariboo, Number One: Being a true story of the first discovery of gold in the Cariboo District on the Horsefly River by Peter C. Dunlevey” (Lillooet, BC: Lillooet Publishers Ltd., 1938), by Alex P. McInnes / McInnis (1868-1938?).

Dunlevey lived from 1834 to 1904, we’re told at the end of the book. So he was about 24 when he was prospecting the streams of Cariboo with other newcomer friends during the 1858 gold rush.

The Horsefly River is squarely in the famous Barkerville region. It also happens to be part of the zone that had a strong and lasting fur trade Métis presence, as I’ve been showing you on this website.

This book also presents several originally Chinook Jargon utterances, mostly transformed into a blend of CJ and English that’s meant to ease the reader’s way. I won’t focus on those here, but they’re interesting for their resembling Cariboo CJ’s otherwise known incorporation of a few local Salish words. Read the book at the link above.

One of the major First Nations personalities in Dunlevey’s reminiscences is Tomaah, a son of a Secwépemc chief; that’s “Shuswap” Salish people. Chief William of the northern Secwépemc is also remembered, and he’s the person who modern Williams Lake, BC is named for. There’s also a tribal woman and her daughters from the Soda Creek area. These folks are largely represented as talking Chinook Jargon as I’ve just described.

Pages 11-12 introduce us to another very important Indigenous figure in the memoir, a Dakelh (“Carrier”) Dene man known as Long Baptiste. The word “Dene” is used in the text itself, suggesting that local Whites were acquainted with that word, distinguishing it from the closely related Tsilhqot’in (“Chilcotin”) language. Here, from page 12, is the crucial passage:

Besides his native Dene, Chilcotin and some Shuswap and Chinook, Baptiste spoke rather fluently the Hudson’s Bay French patois and some English, but the latter with a curious, soft French accent. In fact, he was much in demand as an interpreter in the Company’s dealings with the tribes and by the missionary Fathers as well…

A few more samples of Long Bacheese’s style of speech…

From page 18, a bit of Chief William’s Chinuk Wawa: 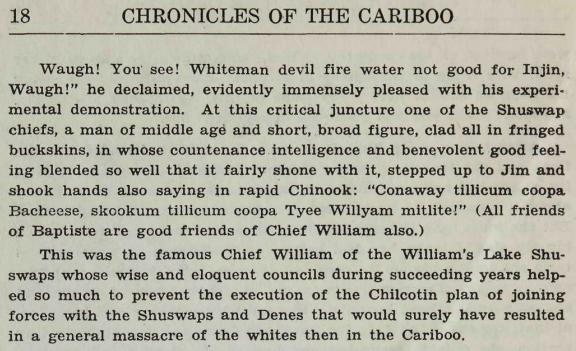 One thought on “1858: Confirmed BC Métis French in the Cariboo”