…the words of Tsimshian chief Arthur Wellington Clah, reported by someone besides him.

Clah has been featured on my site as the author of a famous diary written in a somewhat pidgin-style English with sporadic Chinuk Wawa blended in.

Today we get the chance to compare Clah’s written style with the way one magazine article reported his spoken style. The resemblance is unmistakable.

Here I’ll remind readers that we’ve tended to find Chinook Jargon was less of a presence in Tsimshian country than it was elsewhere on the north coast, so Clah’s command of it might be taken as a relatively rare skill there. It was certainly an extra tool at his command for communicating with outsiders, such as the journalist Grant.

Note that the title’s “Lawoilamsk” is Tsimshian Lax Kw’alaams, also known as Port Simpson, BC. “Clach” is Clah. 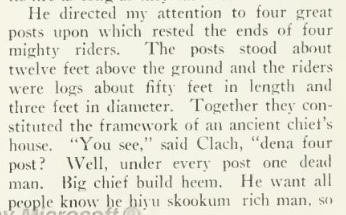 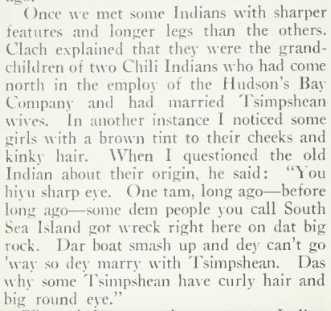 He [Clah] directed my attention to four great posts upon which rested the ends of four mighty riders. The posts stood about twelve feet above the ground and the riders were logs about fifty feet in length and three feet in diameter. Together they constituted the framework of an ancient chief’s house. “You see,” said Clach, “dena four post? Well, under every post one dead man. Big chief build heem. He want all people know he hiyu skookum rich man, so he bury four slave alive when he make new house. Dat’s way my people do long tam ago.”

…I noticed some girls with a brown tint to their cheeks and kinky hair. When I questioned the old Indian [Clah] about their origin, he said: “You hiyu sharp eye. One tam, long ago — before long ago — some dem people you call South Sea Island got wreck right here on dat big rock. Dar Boat smash up and dey can’t go ‘way so dey marry with Tsimpshean. Das why some Tsimpshean have curly hair and big round eye.”

We have the opportunity for a Jargon-related side note here. Later in the article, we find quite an early occurrence of the Chinuk Wawa-origin word Siwash in its BC English slang use for 86’ing a Native person from a drinking establishment. (See “Racially Insensitive Verb“.) It occurs in a variant expression, the “Siwash list”, whose earliest occurrence I’ve yet seen was in December of 1912.

Gulgadagas, being a half-breed, is not on the “Siwash list” at the Spokeshoot saloon.