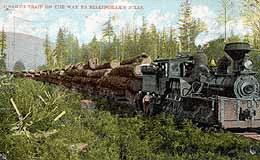 It’s from old memories, and I’m wondering just how fluent these loggers were.

Three loggers sat at a table in a restaurant in Whatcom the other day just behind the Range Rider. They were enjoying themselves by recounting their early day experiences when Puget Sound was “new,” and settlers few and far between.

“I remember,” said one of them, “when I first came to the Sound 28 years ago. I went to work for old Bill Emland down on Hood canal. Bill, like pretty near every one else down there, had a klootchman for a wife, and by jimmy she was a case. She was pretty primitive in her ways when he first got her, and one day she went out exploring among the white neighbors, and saw one of the women making pie. She used her limited stock ot pigeon English in inquiring about how it was made. That evening when her husband came home he found her down on her knees on the floor with a big layer of dough, working it into the crude semblance of pie crust.

“Another time she was visiting Olympia and she saw a piano. She was greatly delighted with it. ‘Mica ikta okok? (What is it?)’ she asked.

The loggers laughed and ate awhile. Another one related:

“Over in Kitsap county we used to have some great times a couple of decades ago. Say, fellows, it doesn’t take long for time to roll around, does it? It seems only a little while ago that we were young bucks?”

The others assented that that was right.

“I recollect,” he continued, “when it used to be that the number of women were not near plenty enough. Dances were the leading feature in our amusement program. There were no roads —only trails and people came afoot and in rowboats. Everybody went, and the lines of color or caste were not drawn closely. One night I went with another young fellow to a shindig where the girls were all spoken for, and it was pretty hard to get a dance ahead with them. My friend said he was going to dance anyway, and seeing a stubby squaw dressed in a green waist, a red skirt and a yellow handkerchief around her head, he made a break, bowed, scraped and shuffled up to her, and with a gallant air asked her if he could have the pleasure of the ‘next’ with her. Without deigning to take her steaming feet down from the top of the sheet iron stove, she replied, with a scornful shake of the head: ‘Halo (no) intudukshun!’