Edited 11/09/2017 to add: read the Comments to see why my readers are a priceless resource. It turns out we’ve found the most southerly occurrence of one obscure Chinuk Wawa word!

Ironically, today’s brain teaser has nothing to do with the subject of the book I take it from!

That book is “Notes on Chasta Costa Phonology and Morphology” by Edward Sapir (Philadelphia: The University Museum, 1914). This is a Dene/Athabaskan language of Rogue River (and consequently now Siletz Reservation), Oregon.

The Appendix adds a little sample of vocabulary from a closely related Dene language, Galice Creek Athabaskan, obtained from a Mrs. Punzie. This is where something tickled my mind:

When Edward Sapir goes in print linking a word to Chinuk Wawa, you pay attention. The man was a supremely talented linguist.

He obviously didn’t recognize the two bolded words here as any Jargon he’d experienced in his years of work with Pacific Northwest Natives. But it’s a fact that we continue to find localisms in various places, so my primary question is not “whether” but “whither”–what was the trajectory from source to Galice?

We’re dealing with a seed that had a name in the pidgin-creole, so, might this have been a useful plant product that was an item of trade? For me the indigenous Galice name ya’/kʻā́s [yaʔkʰás] is reminiscent of an edible pond lily seed called “wocus” [wókəs], a Klamath-language loan (wókash ‘pond-lily, yellow, Nuphar advena‘ in Albert Gatschet’s 1890 dictionary), which has various spellings in regional English. I wonder if those words could be connected.

One of our Chinuk Wawa Lu’lu/Gatherings circa 2001 — we need to organize these awesome annual workshops again! — featured a non-Native elder Jargon speaker reminiscing about folks at Warm Springs Reservation, Oregon, bringing the “wocus” they got in trade from Klamath Indians to be ground into flour in his store’s coffee grinder. I expect that wocus was a word used interethnically in central-southern Oregon Chinuk Wawa, since we’re talking about regionalisms.

Now back to the words that are explicitly said to be Jargon: 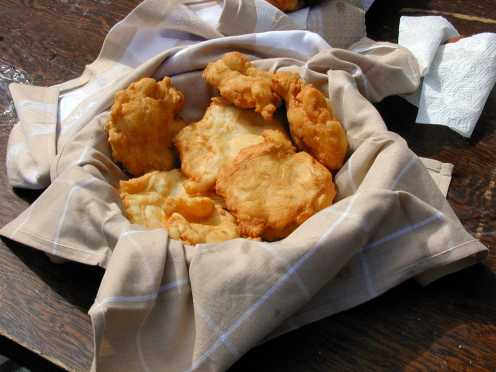 bā́nax strongly resembles a Native-associated word that I know in English as “bannock”. Explaining the absence of a “plain” or aspirated “k” sound, Sapir points out on page 284 that “[Proto-]Athabaskan kʻ, as also in Hupa, has become x in Chasta Costa” — albeit not in Galice Creek — so I wonder whether a similar change to a fricative might have characterized a Siletz accent in Chinuk Wawa? In the present day I hear “bannock” used much more often in a Canadian context than in the States, where the equivalent might be “frybread”. And I haven’t seen “bannock” in Jargon before. But with the strong fur-trade era historical tie between Canada and the American side, it wouldn’t amaze me to discover this as a new item of Chinuk Wawa.*

Alternatively, I feel there’s a weaker resemblance between bā́nax and the Klamath word that Gatschet gives as pála·ash ‘bread’. I dismiss this by commenting no further 🙂

Recall that Chinuk Wawa saplíl/saplél refers both to ‘bread’ and to ‘flour’. Could this typically Northwest Native semantic range help us with the puzzle in front of us?

My thinking is that we might sensibly follow onward from bā́nax to bā́ͅyu. I don’t know if you can see it in your browser, but this second word has a small hook beneath the “a” vowel, to show nasality…and the “n” in bā́nax is a nasal sound. So I perceive a substantial resemblance between these two words. Simultaneously though, bā́ͅyu resembles the known Chinuk Wawa borrowing from Canadian French, púyu / bóya ‘broth, soup’ (Fr. bouillon).

What’s your recipe for soup? The hot & sour and the pork stew that I’ve made this week both called for some starch — flour — to thicken them up. What “bannock” and “bouillon” have in common is flour.

Here’s where I introduce you to Mary Gentry:

MARY …And the only thing that we didn’t can—and we still fix according to tradition—is wocus. Because we haven’t learned to do that with totally modern techniques. Other than a coffee-grinder to grind the seeds to powder—I use a coffee-grinder. But everything else is when my grandma taught me, on my dad’s side, is how to dry the wocus.

JH You would gather that in bulk, wouldn’t you? Out on the marsh.

JH And the wocus seeds—and you’d bring them back. And then what did you do with them?

MARY You let them dry.

JH You let them dry.

MARY Then you dry them. Then you winnow the pod off. The pod dried, and the seed is inside the pod. So when the pod dries, and there’s tons of seed—then you smash them down—and you put them in a gunny sack, and you roll them around. And then you winnow the dry skin and the leaf –and that flies off in the air—and the seeds stay.

MARY And then you take four of the seeds like popcorn in a glass jar forever . And if you want to fix it, then you have numerous steps afterwards to fix it—to prepare it.

JH Did you make it into a flour?

MARY Yes: a meal. Not a flour—a meal. In the stage where it’s prepared like that, it’s more like farina-

MARY Cornmeal, farina—a little bit thicker grained cereal. And then you can eat it like that—you boil it, and you can eat it—or you can put it like flour to make wocus muffins, wocus cake, wocus bread.

MARY Yes. Well, this year right here we have wocus.

By 1911, The “Century Dictionary” had a definition for wokas in English that specified its use in soups.

Robert Ruby & John Brown’s 1988 book “Indians of the Pacific Northwest: A History” likewise documents the use of wocus in soups (page 53).

Not to push the case unreasonably, but summarizing my best guess, the unspecified “seed” in Galice Creek Dene was probably:

*In a study by Liliane Rodriguez titled “Du corpus d’enquête de terrain au dictionnaire” (in the book “Français du Canada – Français de France VI”, I see that bannock / banique / banic / banek / banoque “pain indien non levé” (Indian unleavened bread) is a French Canadianism as well. I don’t know if it’s a sufficiently old one to have influenced Chinuk Wawa; it doesn’t seem to turn up in the wonderfully titled 1880 book “L’anglicisme: Voilà l’ennemi” (“Anglicisms: Behold the enemy”)! For Canadian English, the “Dictionary of Canadianisms on Historical Principles” has bannock as far back as 1878; with the longstanding Scottish influence in Canada, I imagine those folks had popularized this word of theirs long before in that country.