Chinook Jargon was not actually used very much in the Yukon Territory, despite the impressions you may have gathered from Jack London‘s using it for local colour. 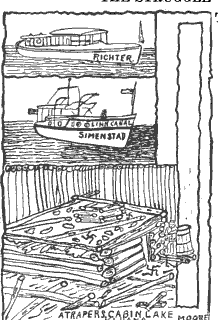 I think it says a lot that this Sitka Jimmy who we’re about to hear actually spoke a mix of “Chinook and pigeon English”, rather than straight Jargon.  Such blends are frequently noted in the late frontier period, a time when, in contrast with earlier contact times, people possessed greater linguistic repertoires to draw on in order to be understood. Search this website for plenty more mixes like this, and read on today to see how much more mixed Jimmy’s speech was…

(I don’t always give trigger warnings, and this particular point wouldn’t have been noticed if I hadn’t pointed it out, but I’d rather you knew that “Lo!” is probably a bit of racist humour on the part of the writer.)

Here’s the bit I wanted to focus on:

Down in the little city of Dawson was still greater confusion. Simenstad paused only to take a dish of Klondike strawberries and bacon with his grateful friend of the piece of string and then, leaving Richter by the stuff, he struck the narrow trail to the City of Desire. The path wound among stumps, along sandy knolls and across swamps. Here and there a tent was pitched, and occasionally a cabin begun. “Hello,” cried a voice, and here came running to meet him a dusky visage, all agrin, a young Indian who pumped his hand, talking rapidly in Chinook and pigeon English, and lo! it was “Sitka Jimmy,” to whom long ago Simenstad had taught his letters. The Indian led him into his little tent-shack. “You come iscum muckamuck [get food–DDR]. Me plenty cowcow. Now me pack mail too. See my gold?” and he dug out from underneath his bunk a tomato can of yellow dust. “Why,” exclaimed Simenstad, “do you keep it that way?” “Oh yes, said Jimmy, “nobody stealem now. Gold too much hyas til (very heavy). You go lookem Dawson, come back eat with me,” and Simenstad went on.

This particular pidgin English shows South Seas influence; compare Hawai’i Creole English kaukau “food” with Jimmy’s “cowcow”.  I can only imagine how Jimmy, who may have been a Tlingit Indian if he was originally from Sitka, Alaska, picked that word up.  For example, the same word, which Drechsel & Makuakane pointed out in a 1982 article was known as a Chinese (Pidgin English) loan into Hawaiian, is found in the Eskimo Pidgin that was used in northern Alaska in the 1890s…Interesting connection.

Here’s the rest of the sparse Chinook Jargon that I found in Kern’s book (same page):

One long street, if street it could be called, ran along the uneven margin of the great river, bending in where the banks had crumbled from the force of the current, and then out where the sturdy roots of the evergreens had held them firm. Picturesque signs greeted him: “Lost Charm,” “The Evergreen,” “Little Skookum [“strong/excellent”–DDR] Saloon,” “Go-as-you-Please.” On all sides mackinaw clad, moccasined and fur-capped men were pulling sleds, lounging aimlessly about or whispering eagerly together of the last “strike.” A company of Chreehakas [typo for Cheechakos, “newcomers” –DDR] were there, gullible as yet, credulous of the wildest tale, easily befooled, and yet men of the sturdiest fibre, a nation in the making, the foundation of an exceptional society. Down the bank swung Simenstad, not entirely a stranger in a strange land. A familiar name over the door of a saloon struck his eye. I wonder if that is an old Minnesota friend, Big Bill McGee?” he mused, as he pushed open the door of the large log-cabin saloon.

By the way, I don’t know if our man above is the same as this Sitka Jimmy. Hope not. But I bet you he was this Sitka Jim memorialized by Geo. Emmons and Frederica de Laguna, and he may be the highly adaptable Sitka Jim who went on to take up the trades of photography and silversmithing.