Jack you patlach me shirt

“Narrative of the Voyage of H.M.S. Herald during the Years 1845-1851: Under the Command of Captain Henry Kellett Being a Circumnavigation of the Globe…” (volume 1) by Berthold Seemann (London: Reeve and Co., 1853).

As we constantly see, the Jargon became modified according to local circumstances.

In the instance of the Port Discovery and Protection Island area (the top end of Washington’s Olympic Peninsula, a handful of miles from the recently establishd Fort Victoria) in July of 1846, there was a great deal of ship traffic due to the maritime fur trade by American and British parties.

So — assuming Mr Seemann was accurately noting down what he heard, which is open to some question when you look at the Spanish he recorded in Latin American ports — the local pidgin became somewhat anglicized. 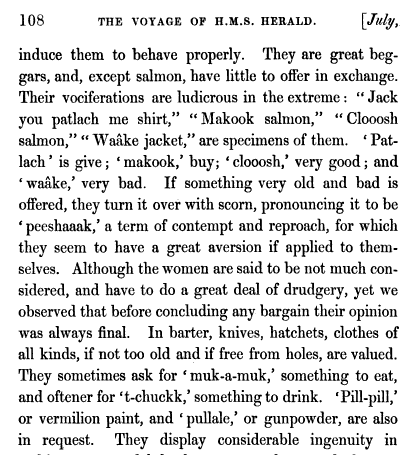 Their vociferations are ludicrous in the extreme: “Jack you patlach me shirt,” “Makook salmon,” “Clooosh salmon,” ” Waâke jacket,” are specimens of them. ‘Patlach’ is give; ‘makook,’ buy; ‘clooosh,’ very good; and ‘waâke,’ very bad. If something very old and bad is offered, they turn it over with scorn, pronouncing it to be ‘peeshaaak,’ a term of contempt and reproach, for which they seem to have a great aversion if applied to themselves. Although the women are said to be not much considered, and have to do a great deal of drudgery, yet we observed that before concluding any bargain their opinion was always final. In barter, knives, hatchets, clothes of all kinds, if not too old and if free from holes, are valued. They sometimes ask for ‘muk-a-muk,’ something to eat, and oftener for ‘t-chuckk,’ something to drink. ‘Pill-pill,’ or vermilion paint, and ‘pullale’ or gunpowder, are also in request.

These ridiculous spellings, I’ll say, bear little trace of having been copied from any other known source.  And it seems as if Seemann was inferring the meanings of the words he heard, sometimes with novel results: waake is more usually “not”, while pill-pill would typically be understood as “red”.  I take all this as evidence that the author was jotting down as best he could a few notes on a language he hadn’t heard spoken before.

There’s hardly any other Chinook Jargon in this book.  The King George vs. Boston contrast is mentioned.  (That’s English vs. Americans.)

And a “Neagh Bay” Makah chief named King George plays a part in the narrative; King George is still a surname in Puget Sound Indigenous communities.

← Is this why they call it False Creek?
Chinese case at Osoyoos →