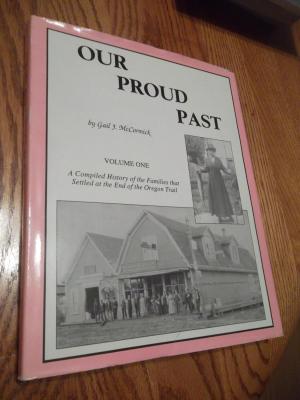 I have readers who will take exception to the title “Our Proud Past” of the book where I found the following nuggets of Chinook Jargon.  (It’s subtitled “A Compiled History of the Families that Settled at the End of the Oregon Trail: Volume One”; author Gail J. McCormick, published by Gail J. McCormick Publishing Company, Mulino, OR, 1993.)  To you I say, at least these pioneers documented something useful of those times.  We can learn from this.

For example, James W. Nesmith’s “Diary of the Emigration of 1843” shows him:

I’ve seen other rememberers of long-unused Chinook Jargon confuse the numerals from 6 to 9, which also tended to get replaced with English numbers.  The teens here are somethin’ else, take a close look; they’re as weird as Joel Palmer’s 1845-46 dilo-pe-iht, etc.

On the same page she mentions the Molalla leader Crooked Finger, who survived the Battle of Abiqua (which began as an attempt to drive out settlers but ended with the latter killing many Indians including women, leading to the conflict being “kept secret for nearly twenty years” by the shamed whites) only to be done in by our recent Jargon discovery, “blue ruin, a cheap rum from the Sandwich Islands.”

And John Warnock‘s firsthand narrative of those events of 1848, “War on the Abiqua”, tells:

I got to know the Chinook language [Jargon] and because I dealt with them Klamaths who came up the trail near my place, both the Molallas and their cousins, the Klamaths and the Cayuses, came to hold pow-wows with me.

Warnock was in fact pressed into service by the Molallas as an interpreter when hostilities commenced.

That’s about it for the discoveries I noticed in this book, but scant as they are, they’re pretty interesting information about early Oregon language contact.